Every year, in March or April I head to the closest Apple store and buy a new iPad.

On March 16th, or whenever the iPad 3 release date is, I will go out and buy a new iPad.

Read: Everything We Know About the iPad 3

Every year Apple releases a new iPhone or iPad, and every year the value of the old model decreases dramatically as soon as the new iPad hits store shelves. The price drops because of the new model, but also because Apple usually sells the older model for $100 less.

By selling my iPad before the new iPad is announced, I can make back much more money than if I were to keep it for a second year and try to sell it. As it stands, I am basically renting an iPad for a year.

“rather sign up the an iPad for life program.”

If I had kept my first generation iPad for a second year, to try to sell, I would only be able to get $150 for it, assuming it was in flawless condition after 2 years of use.

Read: Sell Your iPad 3 Before March 7th For Maximum Profit 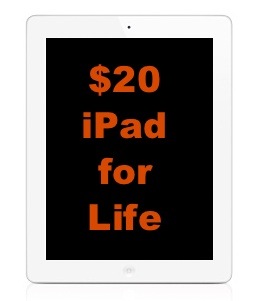 The monthly amount I pay for my iPad is about what I pay for Hulu Plus, Netflix and Rhapsody — services that let me subscribe to content instead of purchasing it to own forever.

I would rather sign up the an iPad for life program, where I paid Apple $20 a month to have the most current iPad than own each iPad and need to resell it.

When the iPhone 5 is announced later this year, I plan to sell my iPhone 4S and buy the new iPhone for the same reasons.

You can always sell your iPad on eBay, but it is more hassle than I care to deal with. If you do want to use eBay, be sure to check out, How to Sell Your iPad 2 on eBay like a Pro.

When it comes to Android phones, the resale value makes selling them almost worthless. My HTC ThunderBolt, which isn’t even a year old is worth just $88 on Gazelle.com — and that’s the best price I’ve seen for a year old Android. The iPhone 4 32GB on Verizon, which came out around the same time with a similar price is fetching $177.