AT&T is now offering $100 statement credits to iPad and iPad mini owners who agree to a two-year contract, regardless of where the tablets were purchased. AT&T previously announced $100 discounts on iPads and other tablets purchased directly from the carrier when paired with a two-year contract, but this new discount is available on any AT&T 4G LTE- enabled iPad with Retina Display (iPad 4) or iPad mini.

We happened upon the $100 statement credit offer when setting up an iPad with Retina (AT&T/64GB) for review purposes. We purchased the iPad from an Apple Store in San Francisco for full price. While the statement credit works with devices that haven’t been activated on AT&T’s wireless network, we haven’t had a chance to see if the offer is available on iPads that are already activated.

The $100 credit is good no matter which plan users sign up for, even the $10 Mobile Share option. Users with existing AT&T Mobile Share plans will benefit the most since adding an iPad to their accounts will effectively cost $5.83 per month after taking the discount into consideration. Not bad for blazing fast 4G LTE speeds. 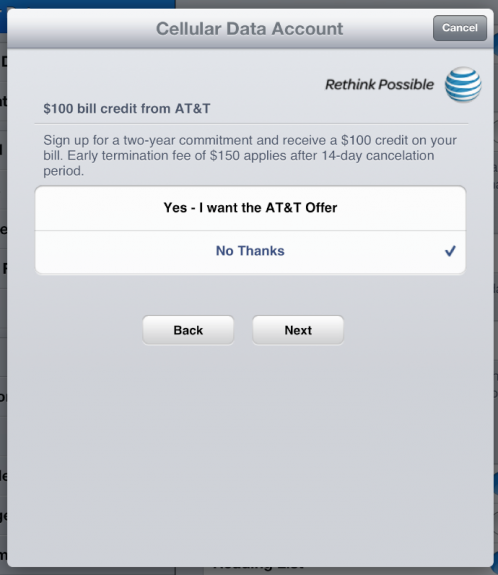 Those who own a New iPad (iPad 3), iPad with Retina Display (iPad 4) or iPad mini with AT&T 4G LTE, but who have not bothered to subscribe to the service can take advantage of this retroactive subsidy.

As with most good things in life, there is a catch with the AT&T $100 statement credit. There is a $150 early termination fee should users find they don’t actually need 4G LTE on their iPads and want to cancel early. Nobody likes early termination fees, but the effective $50 ETF is very reasonable compared to the hefty ETFs we see with smartphones. According to AT&T, users will be able to transfer service to new iPads should they upgrade to a new tablet before hitting the two-year mark. There is a 14-day window to cancel the service and reverse the statement credit.

High-speed data can really change how iPads are used. AT&T’s 4G LTE is more than fast enough to stream video through services like Slingbox and Netflix. Some users will need to increase the data limits in their AT&T Mobile Share plans.

AT&T’s Mobile Share plans do have high price tags compared to other options, but some subscribers will save substantial amounts of money if they have the right mix of devices and users. Those taking advantage of this offer will save a minimum of $19.17 per month.