This is the first iPad 4 deal we’ve seen for the tablet with 4G LTE on Sprint, and the first iPad mini deal on the carrier. The deal also extends to Android tablets like Samsung Galaxy Tab 10.1. The deal is only valid with the purchase of a new smartphone.

Sprint’s Tablet plans start at $10 a month, essentially offering almost a free year of service with the deal, though it does lock users into a contract for two years. This is similar to the AT&T tablet sale that offers $100 off the iPad 4, iPad mini and other Android tablets with a 2 year contract. AT&T does not require a smartphone purchase as part of its deal. The deals at Sprint and AT&T run through January 10th. 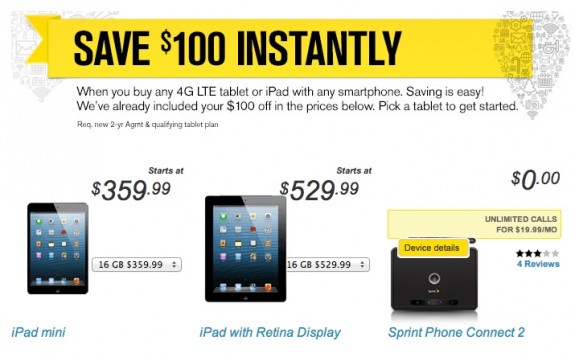 Sprint offers $100 off the price of the iPad 4 and iPad mini with a 2-year contract and phone purchase.

The iPad 4 and iPad mini are the best value for Sprint users looking to pick up a tablet on their growing 4G LTE network. The deal isn’t a great option for users that don’t plan to use the 4G LTE connectivity, and Sprint’s tablet plans aren’t as nice as being able to share a pool of data for $10 a month on Verizon or AT&T.

Sprint only includes a paltry 100 MB of data with the $10 a month plan. The $15 a month plan is better at 1GB, but all of Sprint’s plans are a far cry from their unlimited plans for phones.

Verizon no longer offers tablets with a contract, but the carrier recently introduced a payment plan for the tablets. The plan is available on any tablet priced over $349.99, so customers can split up the cost of the iPad 4 or iPad mini with 4G LTE over the cost of 12 months. There is no contract with the plan, other than the one to pay for the tablet over 12 months. The plan is only available in store at Verizon Wireless corporate stores.