The Apple iPad 4 with 128GB of storage is now on sale in the Apple Store with new orders shipping in one to three days for most models.

The new iPad is identical to the iPad 4 Apple announced in late 2012, but includes a higher capacity internal storage. the base price of $799 prices the new iPad model out of reach for most consumers who have turned to streaming services over locally storing movies and music, but Apple is banking on users who need more storage.

Users can purchase the iPad 4 with 128GB of storage online from Apple starting today. The WiFi and AT&T models ship in one to three days and the Verizon and Sprint models are shipping in three to five days. Shopper should also be able to find the 128GB iPad 4 in most Apple Stores starting today. 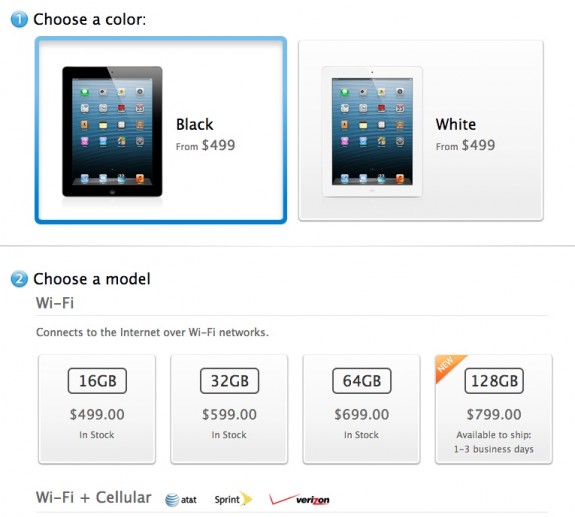 Apple will likely focus the marketing of the new 128GB iPad to professionals who need more storage for large files.

While most of the 128GB iPad sales may end up as enterprise or small business purchases, there are some users who may want to opt for the larger iPad. Gamers who are strapped for space on their iPad now that game files can top 1GB may feel the need to upgrade to the higher capacity iPad and not make choices about what apps to carry. Users who plan to carry a large digital library of movies on the iPad without re-downloading or syncing may find the extra $100 worth it for the convenience, especially if they are constantly travelling.