According to a new rumor, Apple will announce the iPad 5 in April, but this rumor isn’t tied to suppliers, manufacturers or sources, simply that the company has held a Spring event for the past several years.

The iPad 5, the common name for what will be the iPad 5th generation when it is released, is rumored for 2013, but conflicting rumors point to a large potential release window.

The latest rumor comes from Piper Jaffray Analyst Gene Munster who claims Apple is planning an event in the next few months, where the company will announce a new product. Munster believes the new product will be the iPad 5, which may share the iPad mini design. 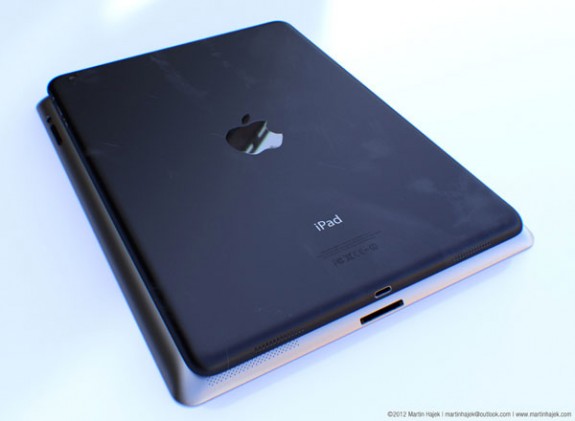 An iPad 5 render from Martin Hajek shows what the new iPad could look like.

Munster ties the likely iPad 5 release date to the amount of time between Apple events, statin in his note posted by AppleInsider,

The average time between the events has been 123 days, about 4 months. The longest amount of time between events since the 3GS launch in 2009 was 216 days (about 7 months), which was the gap between the iPad 2 launch in March 2011 and the iPhone 4S launch in October 2011.

A year-and-a-half ago it would have made a lot of sense to base the iPad 5 release date on the timing of past events, but Apple has already proven that it is not tied to a release cycle it set when launching the first several iPad and iPhone devices.

Apple had good reason to launch the first iPad in April, as the device was met with skepticism at launch and it took time for many consumers to realize the potential of the device, something Apple wouldn’t have been able to do by the Holidays if it had launched in the Fall. After this initial launch Apple stuck with a spring release, but never committed to an annual release cycle.

In October 2012 Apple announced the iPad mini and the iPad 4 at a special event, something that was out of character and just 41 days after the iPhone 5 announcement. While the iPad 4 is generally considered a small upgrade, Apple doubled down announcing the iPad 4 with 128GB of storage in February 2013. Apple has also moved iPhone launches around from summer to fall and even an early launch for the Verizon iPhone 4.

While it is true that we often use past launch dates to predict when Apple and other companies launch a new product, the information is hardly secret, and as any investor will tell you, “past performance is not indicative of future results.”

Previous rumors for the iPad 5 release claim that Apple is looking at a launch in October 2013, based on sources and not dates on a calendar.

One thing all the rumors do agree on is that the iPad 5 will likely share the iPad mini’s design, with a thinner narrower look. Rumors also point to a new Sharp IGZO display showing up in the iPad 5, as shown in renders by Martin Hajek and others.

It is possible that Apple will hold an iPad 5 launch and release event this Spring in April or May, but it is unlikely to do so simply because it has been too long since the last launch event. A better reason for Apple to hold an event this Spring would be to steal press from the Samsung Galaxy S4 which is rumored for a March launch and an April release.