Apple may introduce a new iPad 5 later this year with a thinner, narrower design that looks like a larger iPad mini and new renders show what the iPad 5 might look like compared to the size of the iPad 4 and iPad mini.

MacRumors shares new iPad 5 renders based on the leaked iPad 5 back plate, which showed the rumored new look for the back of the iPad 5.

In the images below, the iPad 5 renders show users what the new iPad could look like next to the iPad mini and iPad 4, as well as the iPhone 5. 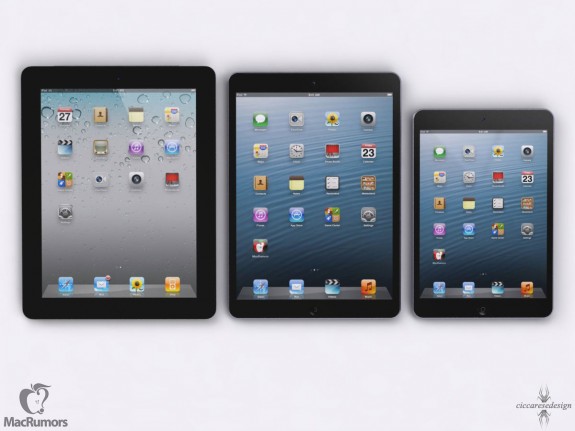 The image above shows the rumored iPad 5 between the iPad 4 and the iPad mini. Rumors point to a smaller frame as Apple cuts the bezel down on each side of the iPad, similar to the iPad mini. Apple was able to overcome errant thumb touches from the smaller bezel on the iPad mini through software, which works for most users, and appears good enough to arrive in an upcoming iPad 5. The top and bottom bezels are slightly smaller, and the hom button is closer to the edge and the screen than on the iPad 4.

Rumors suggest Apple will keep the same 9.7-inch screen size in the iPad 5, and there are no indications Apple is planning to bump up the resolution at this time, though Apple may switch to a Sharp IGZO display in the iPad 5 according to some rumors. 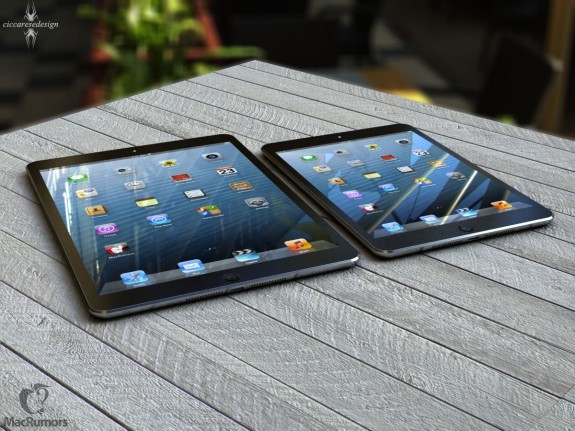 The iPad 5 render shows a new iPad as thin as the iPad mini.

In the second set of renders, users can see that the iPad 5 could be as thin as the iPad mini, which would be an approximately 20% reduction in thickness versus the iPad 4. The rendering also includes a look at the redesigned bottom of the larger iPad which keeps the lightning connector, and adopts the speaker design and slightly beveled edge of the iPad mini.

A new iPad 5 design like this render would make the larger iPad slightly more portable, while leaving a distinct size difference between the iPad with Retina Display and the iPad mini. Early iPad 5 rumors pointed to a release in March, but recent sources point to an October iPad 5 release. A later release seems more likely given that Apple just announced a 128GB iPad 4.