A new iPad 5 video shows off the iPad 5’s back shell next to the iPad 4 and the iPad mini, providing buyers an idea about what to expect from the iPad 5 when it’s released sometime later this year, possibly in October.

For weeks now, we’ve gotten glimpses of what is likely Apple’s new 9.7-inch iPad, the iPad 5. The device, which along with the iPad mini 2, is rumored for a debut in mid-October, hasn’t shown its entire face just yet but the leaks have shown the device’s back shell which has looked the same in just about every leak and depicts a device that has a design similar to the iPad mini.

A new iPad 5 video from Tldtoday again shows this same iPad 5 back shell and its iPad mini design, though, it takes it a step further and shows the iPad 5 next to the iPad mini and a torn down iPad 4, giving buyers an idea about the size of the new iPad 5.

Read: Why You Shouldn’t Buy the iPad 2 or iPad 4 Right Now.

The video shows the iPad 5 next to the iPad mini and iPad 4, showing just how much smaller and compact the iPad 5 is compared to the current iPad that’s on the market. Rumors suggest that the iPad 5 will be thinner and lighter than the iPad 4 and these part leaks seem to back those rumors up.

More interesting though is the iPad 5 next to the torn down iPad 4. When the iPad 4 battery is placed into the iPad 5 shell, it takes up most of the inside of the iPad 5. 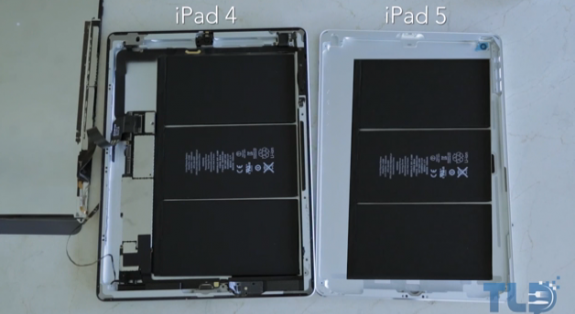 We also get a look at how the iPad 5 could look when turned on, next to the iPad 4. The side-by-side gives us an idea about how thin the bezel on the iPad 5 is going to be. Simply put, it mimics the iPad mini and offers more screen real estate to those in need.

Rumors suggest that the iPad 5 and iPad mini 2 could launch as soon as October 15th, just a day before the Nexus 5 and Android 4.4 KitKat are rumored to launch.

If true, that means that they could potentially be released sometime in late October, ahead of Black Friday and ahead of the holiday shopping season. Both devices are likely to be joined by OS X Mavericks, the new Mac Pro, and likely, some new MacBook Pro models with enhanced battery life.