We don’t expect to see the iPad 5 arrive on stage at an Apple event until October but we are already getting an up close look at the iPad 5 vs iPad 4 in a new video that compares the shell of an alleged iPad 5 with the iPad 4.

Apple has yet to confirm a new iPad, but after skipping a typical spring iPad event in favor of a holiday release the company is overdue to release a new iPad to consumers, bast on past timelines.

A special Apple event on September 10th is on the books, and despite a lot of part leaks for the iPad 5, we expect to see Apple focus on the iPhone 5S and iPhone 5C at this special event in Cupertino California.

We’ve already seen numerous iPad 5 leaks showing a back case and a new front panel that incorporates the thinner bezels and new back design of the iPad mini with a large 9.7-inch Retina Display, but this new video offers the best comparison yet between the alleged iPad 5 and the current iPad 4.

The latest HD iPad 5 video comes from Unbox Therapy which offers a comparison of the iPad 5 vs. iPad 4 complete with measurements.

To get started we see the iPad 5 compared to the iPad 4 from all angles. We start off with a look at the new narrower design comparing the front panel of the iPad 5 to the iPad 4, to see just how much difference thinner bezels can make. 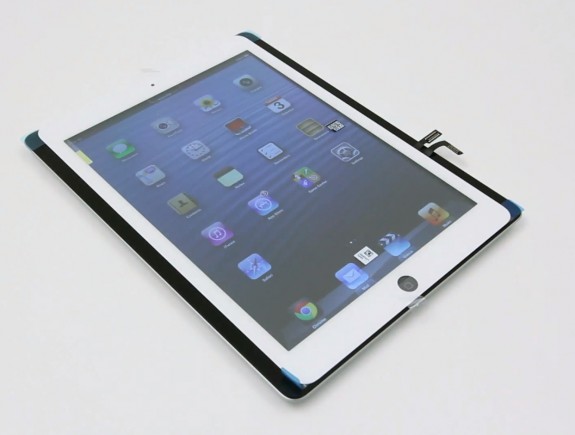 The iPad 5 front panel is narrower than the iPad 4 according to leaked parts.

Most of the iPad buttons and ports remain the same, but the volume rocker is now two separate buttons, like the iPad mini. The iPad 5 in this video includes a Lightning port like the iPad 4, but also adds on iPad mini like speakers which is a welcome addition.

While there are no internals to add weight, Unbox Therapy is able to hold the iPad 5 shell in one hand comfortably, something they aren’t able to do on the iPad 4’s wider form factor. 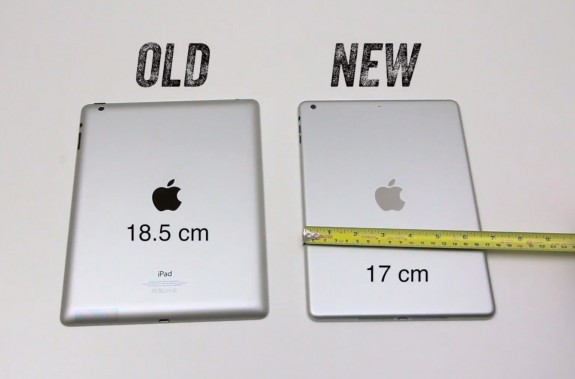 Comparing the size of the iPad 5 vs. iPad 4 using leaked iPad 5 shell parts.

While the rumors claim the iPad 5 will be as much as 20% thinner this comparison calls the difference in thickness, “negligible.” The bigger difference is the narrower iPad 5 shell which measures in 1.5cm narrower. That’s nearly a 10% reduction in width on the iPad 5 with the same size display. This device doesn’t include the display, but we expect the same 9.7-inch Retina Display found in the iPad 4.

Several reports indicate Apple will hold a special event in October to launch the iPad 5 and iPad mini 2, which could put the iPad 5 release in late October or early November, ahead of the busy holiday shopping season.