We could see the iPad 5 release arrive as soon as October, and a new video claims to show off the iPad 5 design compared to the iPad 4 and iPad mini complete with measurements.

The iPad 5 video and photos show off the new iPad 5 space gray color option which arrives as Apple switches out black for a grey back and looks to slim down the new iPad with a design ripped right out of the iPad mini playbook.

This isn’t the first iPad 5 video to arrive with leaked parts for the alleged new iPad, but it is one of the most detailed showing off size comparisons and measurements compared to the iPad 4 and iPad mini which allows buyers to get a better idea of the iPad 5’s size, at least based on leaks.

This new iPad 5 video arrives from SW Box, a parts reseller with access to Apple parts for other devices and a plethora of photos of the alleged back part.

The five and a half-minute video shows off what appears to be a space gray iPad 5 back compared to the current iPad 4 and iPad mini models. These are not the finished products, but backplates for the iPads. In the video we get a look at the size difference and other notable changes.

How Much Smaller is the iPad 5?

In addition to rumors of new internals, consumers will first notice the iPad 5’s size. According to this leaked back plate the iPad 5 will be shorter, narrower and thinner than the iPad 4, offering a more portable package. Here are the iPad 5 vs. iPad 4 size comparisons. 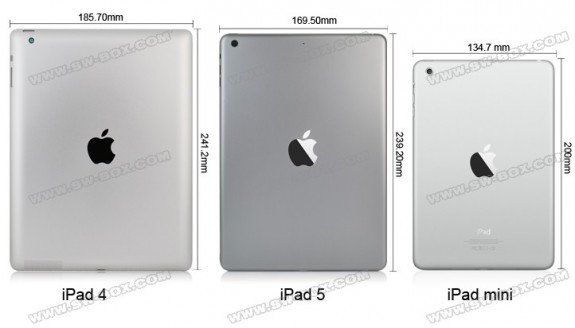 Overall, the biggest change will come in the form of a narrower iPad thanks to the smaller bezels we expect on the front of the iPad 5.

While none of these iPad 5 dimensions are set in stone until Apple makes an announcement, but with leak after leak lining up, this looks like the back of the iPad 5 we could see in the middle of October.

From the video we get a look at 5 iPad 5 design changes as compared to the iPad 4.

Apple is reportedly planning an iPad 5 event for October 15th, when we could also see the iPad mini 2 as well as OS X Mavericks and a new MacBook Pro 2013 update as well.