A new iPad 5 leak allegedly shows a photo of the new iPad 5 back in white and silver with an iPad mini back in silver that could be for the iPad mini 2 or iPad mini 2 Retina, but it is impossible to know from the information provided.

This isn’t the first time an alleged iPad 5 back plate leaked in a photo, but most leaked photos show a black iPad 5 back.

Up to this point, iPad 5 backs are pointing to a new iPad mini inspired design that is thinner and narrower than the iPad 4.

Recent reports point to an iPad 5 event in October, where we could also see an iPad mini 2 with Retina Display — both of which could see a release in October. 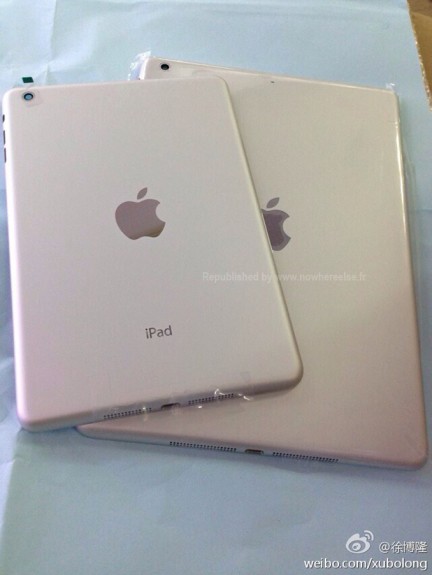 This could be the back of the white and silver iPad 5 with a new design.

The new photo purportedly showing a white and silver iPad 5 back plate comes from Nowhereelse.fr, leaking from Chinese sina Weibo, a Chinese social networking site. Weibo is the source of numerous iPhone 5S and iPad photo leaks, likely from contacts within the Asian supply chain.

The inclusion of an iPad mini back plate in this photo gives a sense of scale to the iPad 5, and shows how the design matches that of the iPad mini.

In April, a photo showing what could be the front of the white and silver iPad 5 leaked, showcasing the thinner bezels that are a key component of the new narrower design. 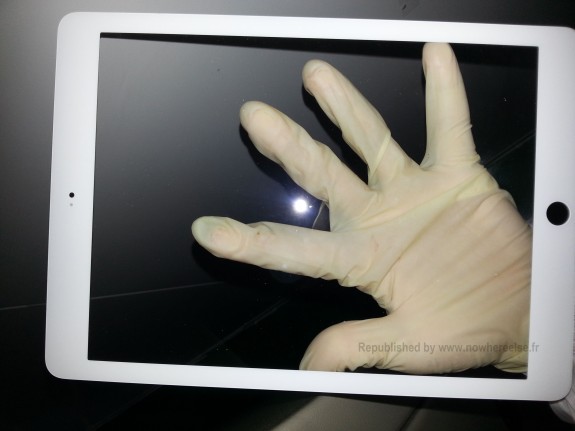 This could be the front of the white & silver iPad 5.

The iPad 5 will reportedly use the same touch screen technology as the iPad mini. This would allow Apple to deliver a thinner iPad 5 thanks to a touch sensor that is built into the front panel. An iPad 5 with narrower bezels would likely use the same software enhancements as the iPad mini to tell the difference between touches and errant taps along the edges of the iPad.

Read: The iPad: Gaming Console of the Future

According to The Wall Street Journal, the iPad 5 display is in production for an October release timeframe. The iPad mini 2 parts are reportedly in production with a release in November possible.

While the iPhone 5S is reportedly coming in a gold color, there are no hints of an iPad 5 in gold or champagne. The iOS 7 update for iPad users could arrive around the time of the iPad 5 and IPad mini 2 releases, according to a new rumor.