Television commercials are typically 30 seconds long. At three times that length, Apple has more than enough time to show that the iPad Air is used just about everywhere, included rugged environments with the proper accessories. 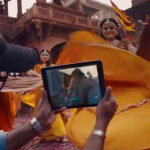 Most commercials would wrap up with a tagline by that phrase ended as 23 seconds elapsed, but Apple’s ad is just getting warmed up. The commercial continues with the phrase “Medicine, law, business, engineering. These are noble pursuits necessary to sustain life. Poetry, beauty, romance, love. These are what we stay alive for.” The commercial showcases that Apple’s iPad Air is used by everyone from engineers and researchers to athletes and dancers.

The viewer is taken on a global tour of iPad Air users, many of which are using the iPad Air as a camcorder. While we typically recommend against using the iPad Air as a camera, the commercial shows a handful of ways where using the camera is understandable and ever preferred to an iPhone or small camera. For example, the videographer at the beginning of the commercial appears to be using a Padcaster, an iPad case that allows videographers to attach a monopod, lenses, microphones, lights and other equipment to the iPad to enhance video quality. Apple also shows how coaches can use an iPad to capture video and instantly analyze it with athletes.

Dead Poet’s Society is a film starring Robin Williams that was released in 1989.  The film is about a poetry teacher that tries to get his students to think differently. The movie is well-known for the popularizing the phrase “Carpe Diem” or seize the day.

The iPad Air is Apple’s latest full-size iPad. It is significantly thinner and lighter than previous iPads, yet retains the same size screen found in earlier iPads. You can read our full iPad Air review here.

This isn’t the first time Apple’s used well-known voices in its iPad Air commercials. Apple hired Breaking Bad’s Bryan Cranston to voice over its “Pencil” iPad Air commercial. Interestingly, that commercial begins referring to poetry before branching off on other themes.