iPad Air Benchmarks Are Twice as Fast as iPad 4

Benchmarks of the iPad Air have appeared for the first time, and they confirm Apple’s claims that the new tablet is twice as fast as the previous-generation iPad 4. Primate Labs posted Geekbench 3 benchmarks for the new iPad Air, and it scored a 1465 with single-core performance and 2643 with multi-core performance, doubling the performance of the iPad 4.

The benchmarks also reveal how much faster the iPad Air is compared to the archaic iPad 2, which Apple is still selling. According to the benchmarks, the iPad Air is over five times faster than the iPad 2, thanks to then new 65-bit A7 chip that’s inside of the newer tablet. The iPad 2 only comes with the slower A5 processor.

Of course, while Geekbench focuses on basing its results off of real-world scenarios, benchmarks never tell the whole story. For example, will iPad Air users actually see twice the loading speed of apps? Probably not. Everything will certainly be faster than the iPad 4, but as with any device that boasts a significant increase in performance, it’s usually only with benchmarks where that happens. 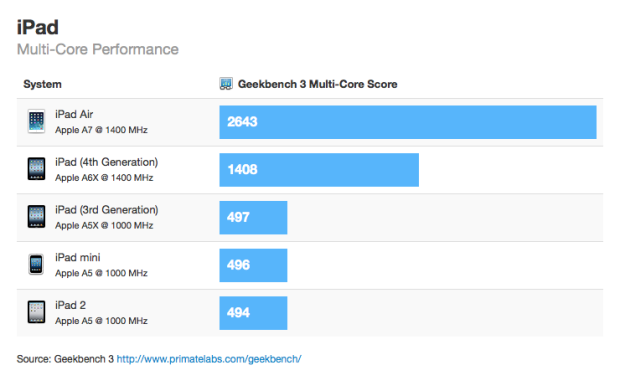 Back to the iPad 2; it’s interesting that the benchmarks show a device that’s over fives times slower than the new iPad Air, yet Apple is still selling it because people are still buying it. Who is seriously spending $400 on an iPad 2? It’s argued that school systems are still using iPad 2 units as a cheaper alternative to the flagship iPad, but for a price of $400, they might as well get the iPad Air or even the iPad Mini with Retina display for the same $400 price tag.

In any case, Apple is still keeping the older iPad around for those that purposely want slower speeds and outdated technology at a slightly lower cost that really isn’t worth it. If you want to wait for the iPad Air, it will officially release on November 1 starting at $499.