Earlier today, Apple announced a brand new fifth-generation full sized iPad that won’t be called iPad 5 but will instead, be called iPad Air. The device, which comes with a number of improvements over the iPad 4, including a new compact design, improved A7 processor and a new camera. Apple, as expected, announced an iPad 5 release date and here, we breakdown everything that buyers need to know.

For weeks, consumers heard rumors about brand new iPads, devices that were supposedly going to show up in October. Apple all but confirmed their arrival last week when it revealed an October 22nd launch date for new products. The company didn’t reveal the products it would be announcing but given that it had been a year since it updated the iPad line, the iPad was due for a refresh.

Rumors pointed to an iPad 5 and an iPad mini 2, upgrades over last year’s tablets. The iPad 5, in particular, was supposed to be a massive upgrade over the iPad 4 thanks to a new design and several significant upgrades to its hardware. And, as it turns out, rumors about the iPad 5, now called the iPad Air, were dead on.

Apple today unleashed two brand new iPads, the new iPad mini with Retina Display and the iPad Air, the fifth-generation iPad that will be coming to replace the iPad 4 with a handful of new and powerful hardware features including a slim, lightweight design with thinner bezels, the new A7 64-bit chip that is also found in the iPhone 5s, and a new iSight camera for better photos and video. The device will be coming with Apple’s iOS 7 software on board and it will be doing so very soon.

The iPad Air, unlike the iPad mini 2, saw its release date announced today ahead of the holiday shopping season. The company, as expected, also revealed the pricing on the new iPad Air. Here, ahead of its release date, we breakdown everything there is to know about the upcoming iPad Air release.

We imagine that Apple will open up orders at midnight, on November 1st, which will allow those who can wait a few days to order the device through the Apple Store, at the very least. Those who can’t wake up that early, remember it’s going to be 3AM EST, will be able to head down to Apple Stores where doors will likely open 8AM, an hour ahead of their usual opening.

Apple did not announce iPad Air pre-orders on stage and at this point, they are looking unlikely. Apple did not offer pre-orders for the iPhone 5s either so it’s looking like the company will follow suit with the new iPads. What this means is that there won’t be a way to order the iPad Air early, something that will put greater importance on ordering online as soon as the device goes on sale.

Demand for the iPad Air could be fierce so those who are planning to buy it as a gift may want to think about waking up early to place an order through Apple’s online store. The device’s are currently in the Apple Store, at least online, though buyers are unable to purchase them. They will remain unavailable until November 1st when they finally do go on sale.

Looking into our crystal ball, we fully expect there to be lines outside of Apple’s retail locations. Last year’s iPad mini and iPad 4 launch was quieter than usual but we attributed that to the iPad 3 and the lack of a Retina Display on board the iPad mini. Apple also offered pre-orders for both devices. Now, we have a very intriguing iPad Air and no pre-orders.

What this means is that buyers who don’t want to brave lines will want to order online the second the device goes on sale. And those that can’t, or simply don’t want to, will likely want to start planning on getting up early to head down to a local retail location for a spot in line. We may not see the type of lines that we saw for the iPhone 5s, but we expect there to be lines nonetheless.

Apple wants attention to be on its Apple Stores and on the devices and by creating this type of release date demand, the company can drum up all sorts of attention for its new devices ahead of the holiday season. Start preparing now.

Right now, Apple says that the only place to buy the iPad Air is through the Apple Store. We haven’t seen retails like Best Buy or RadioShack announce anything yet, though, we saw something similar happen with the iPhone 5s.

We expect more details to emerge as we get closer to the iPad Air release date and we wouldn’t be surprised to see major retailers offer the device on release date or in the days after the initial push.

Apple typically doesn’t confirm that kind of retail availability itself so it will be on consumers to look out for individual announcements from the usual suspects like Best Buy, RadioShack and Walmart.

Finally, the iPad Air will be coming to an assortment of carriers when it arrives on November 1st. AT&T, Sprint and Verizon are on tap for the iPad Air and unsurprisingly, T-Mobile will be joining them. 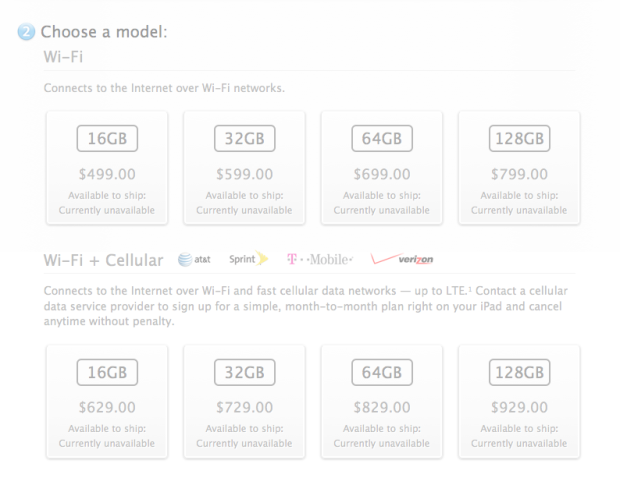 All four carriers will share pricing and storage which means that the iPad Air pricing breakdown will look like this when November 1st arrives:

All of these variants will run on 4G LTE, the fastest cellular network available to them. AT&T and Verizon currently boast the largest 4G LTE networks in the United States, followed by Sprint and T-Mobile.

It’s not clear if carriers will host the iPad Air in their stores. If that’s the case, we expect carriers to confirm that information shortly before the device goes on sale on November 1st. Thus far, we haven’t seen any carriers confirm their plans for November 1st.