The iPad air will be officially launching on November 1, and if you’ve decided that you’re going all-in with the new tablet, you’re next question is most likely which storage size that you’ll want to go with. Most veteran Apple users will already know what they want, but if you’re going to be a first-time tablet owner, you might have a hard time deciding what storage size to get.

The iPad air will come in 16GB, 32GB, 64GB and 128GB flavors, so before you head down to the Apple Store or order yours online, be sure what storage size you’ll want so that you don’t end up with too much storage or even too little.

Unlike a lot of Android handsets, the iPad (and even a lot of Android tablets) don’t come with expandable storage options, so it’s not as simple as sticking in a microSD card when storage gets low in order to bump it up effortlessly. Instead, you’re stuck with the amount of storage that you buy from the start. With that said, we’re here to help you choose the right iPad air model for you.

If you already have an iPad, you can navigate to Settings > General > Usage to see a list of what apps you have and how much space they’re taking up. You can see how much space all of your photos and videos are consuming by looking at “Photos & Camera.” If you’re on Android, you can head to Settings > Storage.

However, if you don’t have an iPad and have never owned a tablet, here’s a quick breakdown of what you’ll most likely store on your device, and how much space it takes up.

The operating system itself takes up space on the iPad. Apple doesn’t really tell you how much, but you can easily find out by going into the Usage page in Settings and adding up the storage used and the storage amount that’s free, then subtracting that number from the total space of your iPad (16GB, 32GB, 64GB or 128GB). For me, on my 16GB third-generation iPad, iOS 7 takes up 2.6GB. This number varies depending on what model you have, but it’s at least an average that you should keep in mind. 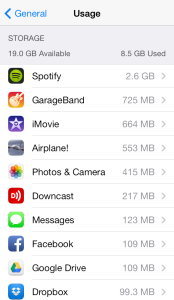 A lot of apps don’t take up a lot of space — usually under 100MB a piece for most, but then again, a lot of apps also store additional data, such as cache, history, etc. This can add another couple hundred megabytes to that. Plus, if you plan on having a ton of apps on your iPad, the storage required can add up. There are also bigger apps like GarageBand, which can take up almost a gigabyte by itself.

The iPad is a gaming paradise for mobile gamers, so if you’re planning on playing a lot of games while you’re on the go, you might be better off getting a high-capacity iPad to store all of those games. Mobile games can be one of the biggest culprits of storage hogging. Depending on the game, they can take up anywhere from a couple hundred megabytes, all the way up to several gigabytes. For example, graphic-intensive titles like Real Racing 3 and Infinity Blade III can take up several gigabytes each

If you’re a music junkie, all of those MP3s can add up, and before you know it, you’ll be out of storage space. My wife has over 50GB worth of music alone, so if she were to upgrade her iPad, she would mostly go for the 64GB at least. Of course, there are cloud and streaming options, like Spotify and Rdio, but that really only works if you’re around WiFi a lot or have an unlimited data plan, which many users don’t have the luxury of using. You can enable offline mode for these apps, but that still takes up precious space, since the music files get downloaded directly to your device.

Besides games, movies and TV shows can be the next-biggest storage hogs; HD movies can take up several gigabytes each. You could go standard definition and save on space, but the iPad’s insane Retina display would make the smaller-res movies look a bit grainy and blotchy, and if you’re a quality nut like I am, you’ll always want your content in high definition. Again, you could stream through Netflix, but that only really works if you’re on WiFi or have an unlimited data plan.

The iPad comes with rear- and front-facing cameras, but taking photos or videos on your iPad is sort of socially unacceptable. Still, people do it, and they end up with a ton of photos and videos on their iPads. All that can add up, and before you know it, you’ll be out of storage space. You could just transfer these photos and videos to your computer in order to free up storage, but most of the time you probably won’t have access to a computer while you’re out and about.

Which Size Is Right for You?

The storage option you choose really just depends on what you’ll use your iPad for, but here’s a quick breakdown of different types of users and what storage size would be adequate for them. Simply just match yourself up to the description that best describes you and you’re set to go.

The 16GB model of the iPad Air is perfect for those who don’t plan on consuming a lot of media or playing games. However, it can be good for those who plan on consuming a lot of media but use the cloud instead. Personally, I use the cloud for everything — Netflix for movies and TV shows, Spotify for music, and Dropbox’s instant upload for photos and videos that I take. Because of this, I never get close to filling up my 16GB iPad.

This is the next step up from the 16GB, but it isn’t approaching power-user status just yet. 32GB is good for the type of users who don’t consider themselves basic users, but also not media junkies that have a lot of games and videos. If you have a healthy amount of apps and play a few games, as well as store a little bit of music, 32GB is probably enough, and it’s probably adequate for a majority of users.

64GB is probably the safest bet for power users. You’ll be able to store pretty much everything on your iPad, with maybe an exception for a few things. You probably won’t be able to stuff everything you have on it, especially if you have a large music collection, tons of movies, and a lot of mobile games, but it’ll certainly be enough to keep you busy while on the go.

The 128GB model is the highest you can go, and it’s really meant for professionals out in the field, like photographers or IT admins that need to store a ton of information and files. However, it’s also meant for the media junkies of all media junkies. Well, maybe not all media junkies, but if you have a large music collection, you probably won’t be able to store all of your music on your iPad and still have room for other stuff. Furthermore, if you download a lot of apps and play a lot of games, as well take a lot of photos and videos non-stop, the128GB version is the only choice for you.

You’ll be paying $100 more for each storage level that you move up, with the 16GB iPad Air starting at $399, the 32GB costing $599, the 64GB costing $699 and the 128GB version priced at $799. By knowing this, it could make your decision a bit easier as far as what storage size to go with. For example, is it worth $100 knowing that you could fit all of your music on your iPad, as well as all of your mobile games at the same time?