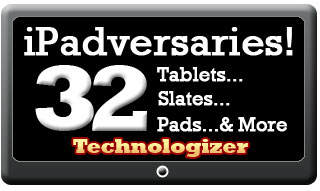 Harry McCracken at The Technologizer says we need to be ready for all the Tablet/Slates coming our way, especially all those alternatives to the iPad. He’s not alone. Lots of folks are saying the same thing as we’re supposed to see Android Tablet/Slates raining from the sky like manna from Heaven. The Technologizer has published a list of 32 alternatives (he calls them iPadadversaries, as in adversaries to the iPad) that are here, coming, or promised to be coming. It’s a decent list, and McCracken lays out his parameters for inclusion very clearly.

Steve “Chippy” Paine after seeing this tweeted a url that lists over a 100 Tablet/Slates out there, maybe out there, or might have been out there. It’s a long list (if you haven’t already been following or bookmarking the database at UMPC Portal you’ve been missing out.)

These lists are great places to start if you’re looking to see what might be available, but I’ll offer this word of caution. As much as we keep hearing about the Tablet/Slate tsunami that is supposed to come crashing onto the shores any day now, keep in mind that some of these devices will never appear, some will not appear in all countries-especially the US (at least initially), and some will be here and be gone before you have a chance to hit the product page. Also keep in mind that you’ll have to keep your eye on the bouncing Android ball as to which version of Android a fancy new Tablet may offer. Case in point, the Dell Streak is shipping with Andorid 1.6. I’m sorry, but when I see that, I compare that to many of the Tablet/Slates/UMPCs on Chippy’s list that are running Windows XP. In my book, that’s not just too little too late, but it’s called “why bother.”

Don’t get me wrong, I’m as excited as the next geek to see what will happen when we start seeing lots of Tablet/Slate alternatives actually reach the market, but I’m also skeptical that the wave that is supposedly coming is going to be as big or have as much impact as the geek world seems to want it to.