Walt Mossberg had a brief chat with Steve Jobs about the iPad on Wednesday that has some interesting tidbits of information. Mossberg usually speaks very highly of Apple products and has even been accused of being a Mac fanboy. But like many of us, he doesn’t seem 100% sold on the iPad.

Ten hours of battery life on a device like the iPad may or may not be enough depending on your usage pattern. The problem I have with Apple’s battery life claims is that they seem to be claiming a whole bunch of different things. 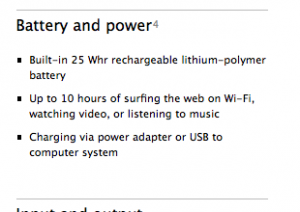 According to Apple, the iPad will get up to 10 hours of battery life whether you’re web surfing, reading, watching movies or listening to music. Note the dreaded “up to” that’s used on a lot when describing battery life. Every time I see “up to” printed before battery life claims I know it really means “with wireless disabled, screen dimmed, processor near idle and with the appropriate stars aligned.”

On stage on Wednseday, Jobs said that the iPad would run for 10 hours while playing back video. I believe the exact quote was something like “Ten hours of battery life. I can fly from San Francisco to Tokyo and watch video the whole time.”

Anyone that’s ever used a mobile device knows that battery life varies depending on what you’re doing with the device. The iPad is no exception. If jobs is claiming 10 hours of battery life while reading books, there’s no way it’ll last for 10 hours while playing movies. And of course it should last for a lot more when playing music with the display dimmed or wireless turned off.

From around the mid-point in the video:

Jobs: “Music it is 140-something hours i think of continuous music playback

Mossberg: “What about reading?”

Jobs: “10 hours…It’s all about the display…you can read at night”

Yes, the iPad is a lot more than a digital book like the Kindle, but battery life matters a whole lot in my opinion.

The truth of the matter is we won’t know what the battery life will be until it ends up in consumers’ hands and people start complaining or praising it. But that’s a problem for me. Average consumers should be able to make informed buying decisions based on a spec sheet and what executives like Steve Jobs tell them.  If the iPad really will last for 140 hours while playing music people should know about that. If the iPad will only last for a few hours while streaming movies they should know about that too before buying it.

By the way, Mossberg is in the ‘All other Tablets have failed’ camp.