iPad born before iPhone? Where have I read that before... 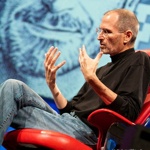 Steve Jobs stirred the pot a bit yesterday with his interview at D8 (of course, pretty much anything he says stirs the pot). One thing catching people’s attention is his mention that the iPhone started as a tablet. Caught my attention too… just like it did two years ago.

Video of this quote is posted at WSJ. Transcript below is from Engadget.

Walt: So when you built this OS, you did it in a phone. Why? Why not a tablet first.

Steve: I’ll tell you. Actually. It started on a tablet first.

I had this idea about having a glass display, a multitouch display you could type on. I asked our people about it. And six months later they came back with this amazing display. And I gave it to one of our really brilliant UI guys. He then got inertial scrolling working and some other things, and I thought, ‘my god, we can build a phone with this’ and we put the tablet aside, and we went to work on the phone.

Stunning revelation, right? Actually, not so much. Here’s something Wired wrote about the same subject about 2.5 years ago on 01/09/08.

Jobs had reason to be confident. Apple’s hardware engineers had spent about a year working on touchscreen technology for a tablet PC and had convinced him that they could build a similar interface for a phone.

So basically, Steve didn’t spill anything new; he just confirmed a previous report. Also indirectly confirmed is the time frame for something GBM founder Rob Bushway passed along five years ago regarding the existence of an Apple Tablet prototype described as “…running a reduced version of OSX, with some funky start-up PDA like Apple icon menu. Touch only…” iPhone was announced in 2007, tooled down from the previous tablet project, which they’d worked on for a year. An iPad prototype in May 2005 would fit right in, wouldn’t it? Also explains why it was put on the shelf for so long. Thanks Steve for finally corroborating (and to some degree, vindicating) these earlier reports.

P.S. In case we’re keeping track, I’ve been calling the iPhone a “small tablet” since it was first introduced.