When the iPad 2 was announced, one of the biggest things we focused on was the inclusion of front and rear facing cameras. The ability to take pictures with the iPad and FaceTime was huge — and much requested. So, a few months later, are we really using the iPad 2’s camera? If you take the Flickr uploads looked at by ElectricPig to be the defining proof, the answer is not really. An astonishingly low 22 Flickr members are uploading photos taken from the iPad 2’s camera. 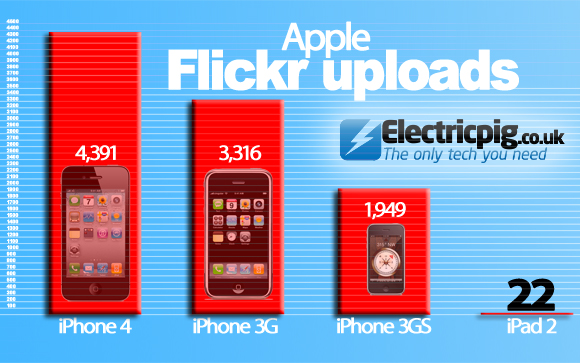 When you think about it, this isn’t really that surprising given the poor quality of photos taken with the iPad 2’s built in cameras. Odds are most iPad 2 owners have a better camera on their cell phone. Heck, even feature phones can beat the quality of the iPad 2 for stills.

It’s more likely that the iPad 2 cameras are getting use as FaceTime cameras. In the past 2 months, I’ve used the Pad 2 to FaceTime home to talk to my mom and to say hi to the neighbor kid that calls their house a second home. Incidentally, the neighbor is absolutely fascinated with FaceTime and is usually the one begging my mom to get her MacBook Pro out to call me up. While I don’t always have a MacBook with me since I am testing notebooks for Notebooks.com, I almost always have my iPad at hand, at least when there is WiFi near.

The real question is, are you using the iPad 2 camera?