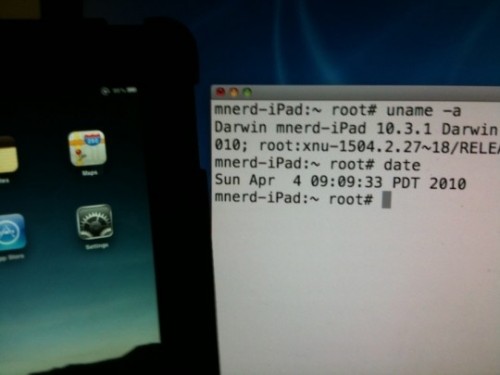 I should have put money down on this one. Word running rampant through the Internets (via Slashgear for me) is that hacker MuscleNerd has applied the “Spirit” jailbreak to the iPad, and the proof is already on YouTube.

First hit Twitter a few hours ago. Obviously too early to expect a jailbreak that everyone can apply, but the first step has been done, opening the door for non-sanctioned apps and mods to be installed and applied to the iPad. No guarantee it will work for the 3G version, but if MuscleNerd can hack an iPad on day one, I think he and the rest of his team can work out something. If so, look for this usage scenario to become really popular…

Cheap mobile hotspot: Though not official yet, you can bet the iPad will get jailbroken, opening the door for PDAnet to turn it into a mobile hotspot. No guarantees this will happen, but the possibility of a no-contract, cut-rate mobile hotspot is extremely enticing.

Don’t say nobody saw it coming.