Advertising gimmicks are nothing new. From costumed characters dancing on city sidewalks to “booth babes” at trade shows, it’s easy to think that we’ve seen it all. We may want to rethink that, though, after this latest stunt by the publishers of an upcoming iPad magazine. Fellas, meet “iPad Head Girl.” 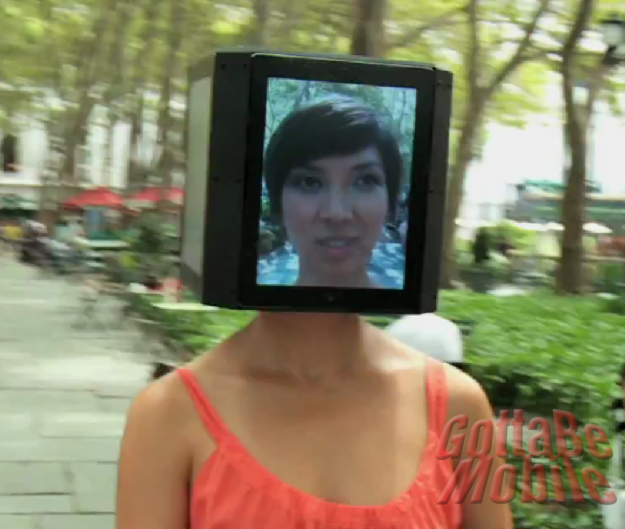 Yes, if you were hanging around in New York’s Bryant Park recently, this is what you might have seen. A young woman with four iPads spliced together on her head sauntered in, took a seat, and pretended to read a book.

The intended climax of the promo comes when the first brave soul swipes his hand across her iPad head. Promo materials for an upcoming iPad-only men’s magazine were then instantly available. The magazine’s pitch is that it will help men get inside women’s heads.

Get it? It helps you to get inside women’s heads??

You have to hand it to publisher Hearst for doing something outside of the box, but we have a feeling that the heads these single guys are trying to get into are significantly less creepy than this one.

As the sample articles articles splashed onto the iPad screen tell us all about “sex maps” and bedroom sounds (while showing us semi-naked models) we aren’t sure if the association they’re trying to make here is working. Sure, nudity and sex advice have been the staples of successful magazine sales for years. But do you really want your potential readers mentally associating their libidos with a woman whose head was manufactured by Foxconn?

If you’re feeling brave, you can witness the shameless plug in the clip below: