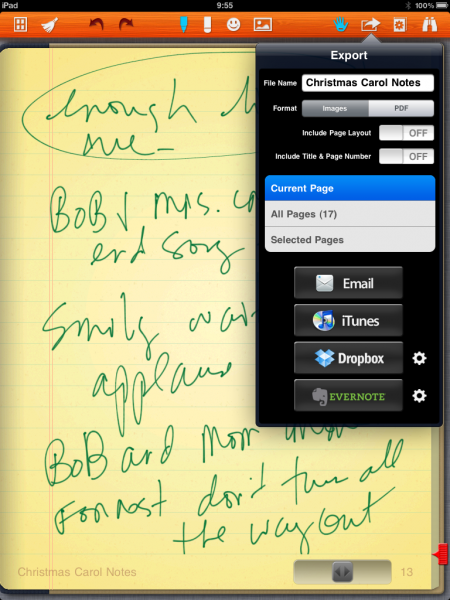 Some say Apple should just buy Dropbox. Maybe they are are right. For many Dropbox has become the de facto file system for the iPad as it allows users to move files around from device to device. For me it is an essential tool. And the fact that Dropbox makes its API available to other developers continues to open up opportunities. Evernote is also an essential App for me. Between these two Apps I can have access to anything I write, grab, snip, or whatever on any device I choose to sit down with.

I’m deep in rehearsals for A Christmas Carol at Wayside Theatre and that means digital note taking. As many readers here know I’ve been experimenting with different Apps and different stylus solutions for the iPad. I’ve recently chosen Noteshelf as my digital note taking App of choice. (You can check out Noteshelf on video in this GBM Shortcut.) A recent update to that App makes it an even better choice.

Noteshelf recently added the ability to export documents to both Evernote and Dropbox. This is huge in my work flow. I’m able to choose whether to export a page or an entire notebook to either Evernote or Dropbox. I can send the document as an image or a PDF. All of my notes for productions eventually make it into Evernote anyway. You can also export your notes to iTunes or via email. But what has me excited about this functionality is that Noteshelf is now essentially extensible in ways that it wasn’t before. By the way, other Digital Inking Apps use the Dropbox APIs as well, but Noteshelf is my choice of the moment.

Last night after a long day of rehearsal I needed to gather up my thoughts from my notes to prepare the agenda for our production staff today prior to the next dress rehearsal. I could have just opened up the notes on my iPad and sat that device adjacent to me while working on my MacBook Pro. Instead I just opened up the PDF file on the MacBook, and used that to create today’s agenda.

This functionality in Noteshelf makes this App really shine on top of its already excellent Digital Inking experience. Hopefully the next update will allow for Fast App Switching now that iOS 4.2 is out. I would have probably been able to eliminate the MacBook from the process I just described if that had been available.

Note also that Noteshelf is now a part of the Evernote Trunk program.