In just a day Apple will take the stage for a fall 2013 event where we expect to see the new iPad mini 2 and the iPad 5, as well as a collection of other Apple announcements.

The Apple 2013 fall event should specifically usher in a new iPad 5 with a thinner and lighter design and according to latest information an iPad mini 2 with a new higher-resolution Retina Display.

New iPad rumors offered contradicting opinions on the inclusion of a Retina Display on the iPad mini 2 as Apple reportedly dealt with supply and power usage issues for this new part, and some questioned whether Apple could keep a Retina iPad mini 2 priced at $329 given the company’s high profit margins and higher cost for the Retina Display.

Apple is not commenting on the new iPads, but two new reports from established sources point to an iPad mini 2 with a Retina Display on Tuesday. 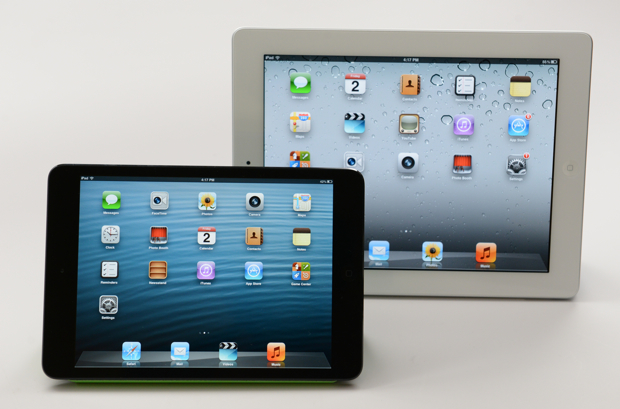 The Wall Street Journal reports that Apple will announce an iPad mini 2 with a Retina Display at the October 22nd event, citing parts suppliers as the source of the rumor.

“Apple is now readying a revamped iPad Mini with a high-resolution “retina” display. It’s also working on a thinner, lighter version of its standard 9.7-inch iPad, using a thin film instead of the glass found in existing models…”

The Wall Street Journal is often the source of Apple rumors that some suspect are controlled leaks. This status means Apple rumors that originate here get more attention than those from other anonymous sources.

A second well-respected source of Apple leaks and accurate predictions is Ming-Chi Kuo, an analyst with KGI Securities with a very impressive track record of sharing Apple’s plans ahead of the official company events. Kuo shares information about the iPad 5 and iPad mini 2.

Kuo’s latest report backs up the Journal’s claim that the iPad mini 2 will come with a Retina Display, as reported on MacRumors. If this is true, expect a 7.9-inch display with a 2048 x 1536 resolution, which should deliver a better reading, watching and browsing experience on the iPad mini. Kuo believes that the iPad mini will use a new Apple A7 processor like the one found in the iPhone 5s and that it will come with the new M7 motion co-processor which some apps can tap into for additional data.

While some leaks show an iPad mini 2 and an iPad 5 with a Touch ID fingerprint sensor, Kuo claims there will “probably” not be a fingerprint sensor on the iPad mini 2 or the iPad 5. The note also claims it is unlikely that the gold color option Apple introduced on the iPhone 5s will make it to the iPad 5 or iPad mini 2. Apple is focusing iPhone 5s ads on the gold color option even as users need to wait two to three weeks for online orders and stores are sold out of gold iPhone 5s units across the U.S.

The note also addresses what buyers can expect from the iPad 5, including an upgraded Apple A7X processor, based off the iPhone 5s’ A7 processor and a M7 co-processor. The iPad 5 will also adopt a new design, similar to the iPad mini, which is thinner, narrower and lighter than the iPad 4 on shelves today.

We also hear again that the iPad mini 2 and iPad 5 could feature better cameras, with a bump up to 8MP expected. Kuo believes Apple will boost this feature to better compete with the Nexus 7 2013 which includes a decent camera.

Thanks to a possible controlled leak and Kuo’s sources it appears there is little left for Apple to offer as a new iPad surprise at the event on Tuesday. Apple is holding the fall 2013 event at 10 AM Pacific, 1 PM Eastern.