When the iPad mini showed up in our home, my youngest son fell in love after a few minutes.

He said, “I’d rather have this than the Samsung Galaxy Note.” Dad’s mind started calculating and I realized that a year’s worth of data could pay for it so I offered to buy him a dumb phone and give him the iPad mini and he agreed.

After selling his old phone and a Kindle Fire, we covered most of the cost of the 32GB iPad mini.

Price isn’t the only reason to swap out a smartphone for a small tablet. The iPad mini serves as a great gaming machine. The larger iPad worked well too, but felt a little too heavy. The 7.9″ screen and light frame feels good in a gamer’s hands. Gaming with a smartphone always feels like a compromise even on a 5-inch screen. 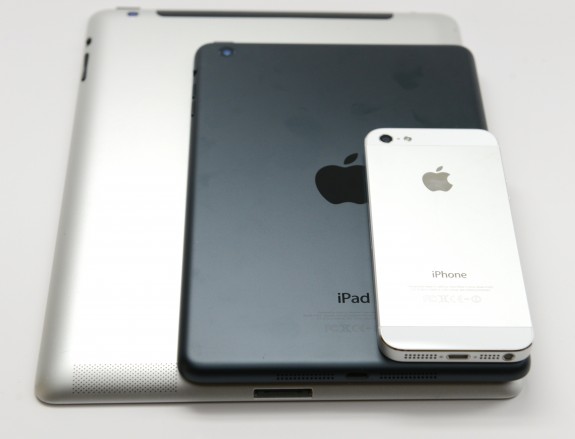 iPad mini makes a smartphone obsolete for some users.

The iPad mini works great for streaming video. Many teens live on YouTube and watch hulu Plus more than regular TV. They can use a smartphone, but it works better on a 7 to 8-inch tablet.

Carrying a large iPad to school makes it very tempting since a high school kid can’t hide it as easily as he can hide the iPad mini. It’s not as obtrusive in class either. Reading and taking written notes feels good with the iPad mini, better than the Samsung Galaxy Note thanks to the extra screen area.

In order to pay for the iPad mini, we sold my son’s Samsung Galaxy Note on Craigslist for $175 and my Kindle Fire for $125. Now his phone costs me just $10/month instead of about $50. In three months the savings will pay for the difference between the amount we got for his old phone and Kindle Fire and the cost of the 32GB iPad mini Wi-Fi version.

We found a decent slider phone on eBay so he can still talk and text. It also plays music stored on a micro-SD card and the battery lasts longer than his Note did when he would play music with it.

He’s happier and the envy of his friends. I’m paying AT&T less so I’m happier. I doubt this will become a trend, but parents should consider it. For Android fans the Nexus 7 or 10 might entice kids to give up their expensive smartphone.