Apple sells the iPad mini for $329, $130 more than the lowest cost Google Nexus 7 Tablet and Amazon Kindle Fire HD. Both competing tablets ship with the same amount of storage and use similar sized displays in a Wi-Fi only device.

To add more memory to the iPad mini, pushing storage from 16GB to 32GB or 64GB, Apple must pay an estimated $90 and $188 more respectively. 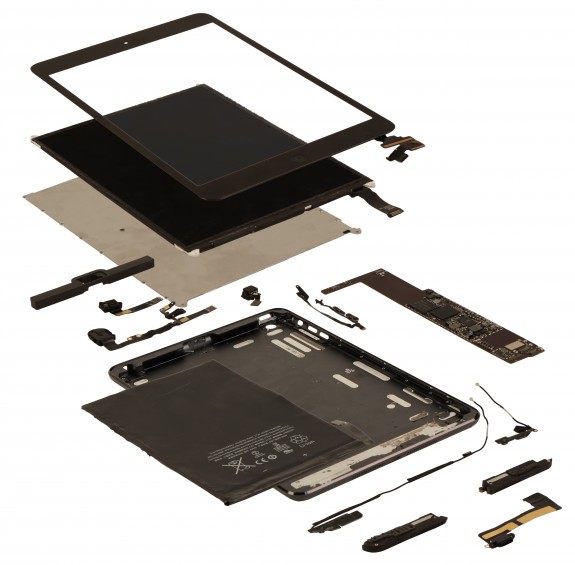 If IHS correctly estimated the cost of extra memory, Apple only gets an additional $10 to $12 in profit from the 32GB and 64GB models, explaining the $100 price bump for extra storage. It doesn’t explain why Google and Amazon can offer additional storage at a cheaper price.

The teardown reveals a few other tidbits of information about the iPad mini that may interest tech enthusiasts. The 7.9-inch display comes from LG and AU Optronics. Each iPad mini display adds $80 to the estimated cost of the parts. The thinner display uses something called GF2 which helps keep the tablet so thin and light. The manufacturing process will likely become more efficient as the manufacturer works out complications, but don’t expect that to lower the cost of the iPad mini.

The A5 processor still comes from Apple’s legal nemesis Samsung. However, the iPad mini uses fewer Samsung parts than previous iPads. Companies that supplied parts include Hynix Semiconductor for memory chips, costing about $15.50 each, Cirrus Logic for the audio, STMicroelectronics for the accelerometer and Broadcom for the wireless chips. IHS could not figure out which supplier made the iPad mini camera.

To compare this teardown with past tablets, see our Nexus 7 teardown coverage and the Kindle Fire HD teardown from iFixit. To see how the iPad mini compares to a larger ipad, check out the iPad 3rd generation teardown.