Customers who pre-ordered an iPad mini, and who live in either New York or New Jersey, will likely not receive the device tomorrow due to the Hurricane Sandy and the conditions it has left in its wake.

Both UPS and FedEx, who are responsible for making iPad mini deliveries, have both announced that shipments heading to addresses in states in the east coast will face delays due to Hurricane Sandy which struck earlier this week and which left roads in poor conditions. UPS has announced that it won’t be making deliveries in several zip codes tomorrow in both New York and New Jersey while service in other states will likely see delays as well.

Read: How to Check if Your iPad Mini Has Shipped.

We imagine FedEx will likely face similar difficulties in the areas where UPS is unable to deliver as well.

The area codes in New York that won’t see UPS service of any kind tomorrow include: 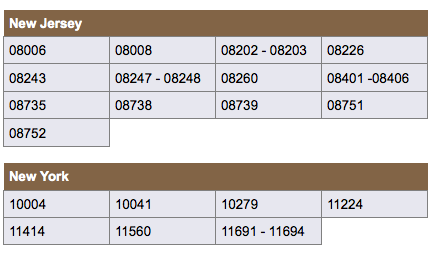 UPS also says that deliveries and service in Connecticut, Delaware, Maine, Maryland, Ohio, Pennsylvania, Virginia, Washington, D.C., and West Virginia might be affected as well due to Hurricane Sandy.

Obviously, this is unsurprising and given the events of earlier this week, unlikely to matter to many of those who pre-ordered either the iPad mini or the iPad fourth-generation ahead of tomorrow’s release date.

Read: Where to Buy the iPad mini.

The iPad mini and iPad fourth-generation are both slated to hit shelves tomorrow at Apple Stores and Best Buy, at the very least, with the 4G LTE models arriving sometime later on this month.