As expected, the folks at iFixit have gotten a hold of the new iPad mini with Retina display and put it on the surgery table to get torn apart. What they found was something similar to the iPad Air: not much flexibility as far as repairs go, and iFixit gave the new iPad mini a repairability score of just 2/10, but it’s not all bad.

iFixit notes that the new model comes with the LCD and the front glass not fused together, making screen repairs a lot easier this time around, and the battery isn’t soldered onto the logic board, making it easier to replace as well if it ever goes bad. However, as with the iPad Air, there is tons of glue that hold the device in place, which isn’t surprising at all, and for a device this small packing in so many components, glue is pretty much a must in this case.

The iPad mini with Retina display is a bit thicker and heavier than the original iPad mini, but that’s mostly to compensate for the faster internals, larger battery and the higher-resolution Retina display, which sports a 2048×1536 resolution (the same resolution as the iPad Air). However, the device is still extremely thin all around. 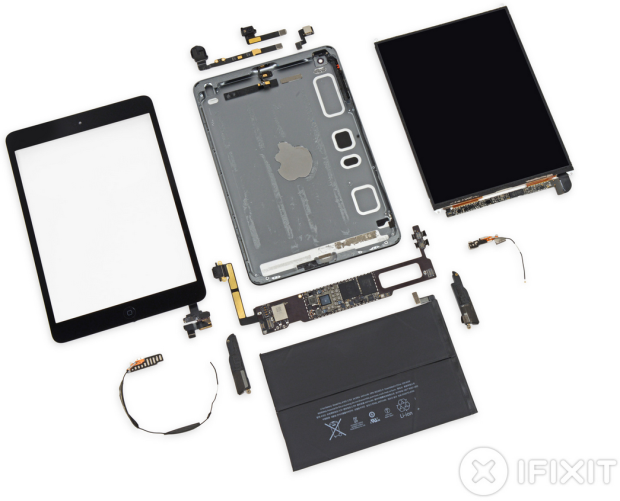 The battery takes up the most space, obviously, and since this new iPad mini is rocking a better display, Apple had to put in more juice this time around, making the inside around 90% battery and the rest being the various chips. Thankfully, the logic board isn’t glued in, but iFixit says there at a ton of hidden screws, making it a bit difficult to quickly tear down the device.

The iPad mini with Retina display also comes with the same processor as the iPad Air and iPhone 5s, but only clocking in at 1.3GHz, which is a bit slower as the iPad Air, but the same speed as the iPhone 5s. And of course, you also get the new M7 coprocessor for motion tracking like counting steps in your favorite fitness app.

Overall, if you ever drop your new iPad mini and accidentally break it, don’t expect to be able to fix it yourself. You’ll have to take that puppy into an Apple Store and get it fixed by the pros (hopefully you ordered the AppleCare+ with that).