Though Apple only promised a late November release date for the iPad mini with Retina Display when it announced its new iPad, we are now seeing November 21st being listed as the availability date according to one retailer and Apple partner. Target is now listing the date on its Target.com website in the product overview.

Interestingly though, Target is saying that the tablet won’t be sold in stores at this time, a fact that could change once the tablet arrives. The webpage also notes that at this time, naturally, the tablet is unavailable.

The listing was spotted by Mac Rumors. 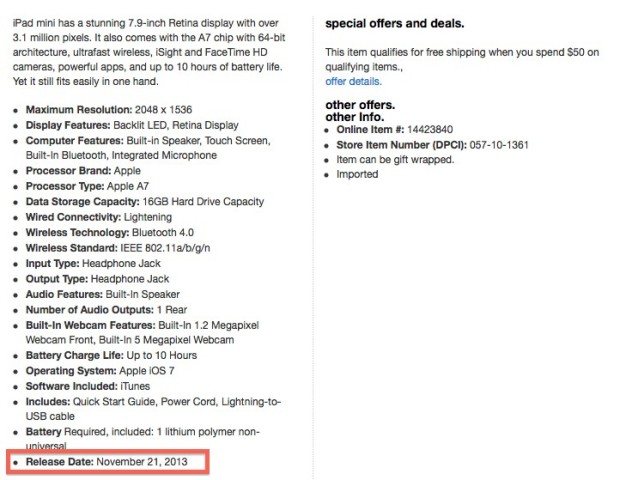 Apple this year has updated that iPad mini with Retina Display to have specs that match the bigger iPad Air. This means that the new mini will have the same 64-bit ARM-based A7 processor, the same Retina Display resolution screen but in a 7.9-inch package, and the new iOS 7 operating system along with free copies of iPhoto, Garage Band, iMovie, Pages, Keynote, and Numbers–a suite of creative and productive apps that normally sell for $5-10 a piece.

It should be noted that Apple still has not confirmed when the iPad mini with Retina Display is expected to go on sale so this date should still be taken with a grain of salt. However, if the date holds accurate, it could be a big win for Apple as the iPad mini with Retina Display would be available for purchase from eager buyers through Black Friday, the busiest shopping day of the year as retailers gear up for the holiday shopping season.