Director of Tablet and Monitor Research Rhoda Alexander of IHS iSuppli told CNET that Apple could not achieve the volume it needs for a Retina iPad Mini. 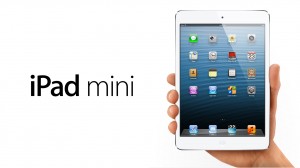 “The Retina Mini looks less certain for that time. Manufacturing volumes on that would match better with a Q1 ’14 [first quarter 2014] launch,” Alexander told CNET.

However, Alexander was not secure in her words and even the analyst did not fully believe her claims.

“Given that it’s Apple, one never knows,” she followed up.

Given how opinionated analysts are, it’s odd to hear that Alexander was not more confident in her position with the iPad mini’s launch timing.

So far, rumors and predictions with the iPad mini have been all over the place, adding further confusion to the highly anticipated successor to the popular iPad mini.

When it launched, the iPad mini was criticized for not having a Retina Display that the bigger iPad shipped with, but reviewers fell in love with the size, weight, and portability factor of Apple’s 7.9-inch tablet.

Given that Apple had seemingly achieved a great balance here, and given that we are hearing that the iPad 5 may shed some pounds and girth to go slimmer and maintain the extra sharp display, it’s unclear why Apple may need to bulk up the iPad mini’s size and weight to add a Retina Display. However, this may be the case, and Alexander says, “I don’t think that there’s any way that they’re not going to have a tradeoff with thickness.”

It’s unclear if that will be the case. Apple currently offers three iPhone models on sale at differing price point, and introducing two new iPad mini models along with selling the current one at a discount could help Apple expand its market share and reach new customers. Can we have an iPad mini, iPad mini 2 with Retina Display, and iPad mini 2 model this year similar to how Apple is currently offering the iPhone 5s, iPhone 5, and iPhone 4s at different price points?