Photographers often want to simplify the process used to take pictures, edit them and share them. The iPad mini, an app called ShutterSnitch and a Wi-Fi SD card from Transcend improves that workflow, making it easier and faster. It also can improve the quality of pictures.

Photographers struggle to see their images due to the small digital camera’s displays. A shot might look sharp on a tiny screen, but on a big monitor or Retina Display on their MacBook it might look blurry or too bright/dark in spots.

So what if photographers could see the images on a larger eight-inch screen instantly, just a moment after they snap the photo? An iPad mini loaded with ShutterSnitch and connected to a Transcend Wi-Fi SD card makes this possible. 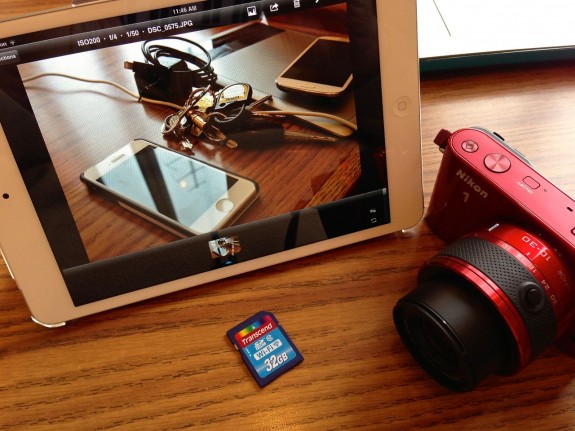 The three things we mentioned above make this happen. Get an iPad mini with as much storage as possible. The photographer doesn’t need the LTE version, Wi-Fi works perfectly. We recommend getting at least the 32GB of storage. Go with the 64GB model if affordable.

We reviewed the Toshiba Flashair SD card recently, but then found that the Transcend Wi-Fi 32GB SD card works better. It offers more storage. The included configuration tool makes it easier to get the card working. Transcend offers a great iPad app that connects to the card and works well. However, we found a better app that does all that the Transcend app does, and more.

See the instruction video form Transcend on connecting the card to the iOS device and using their proprietary app:

Shuttersnitch costs more than most apps, but works so well in this workflow that it makes the app worth the $15.99 for pro or serious amateur photographers. The app instantly shows a picture moments after the camera grabs the image. It also downloads the image from the Transcend card to the iPad so the user can edit the image and then post it online.

Be sure to see our list of great iOS photography apps to find a great photo image editing tool.

The ShutterSnitch app takes some configuration to make it work with the Transcend card. It also works with the Toshiba Flashair card and Eye-fi cards. 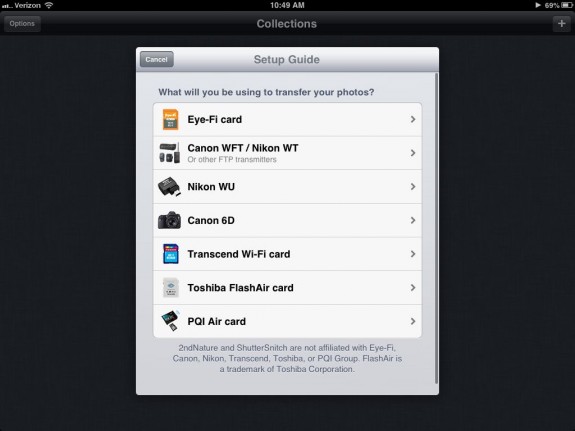 Once configured, turn on the camera and wait a minute for the card to boot and begin broadcasting the Wi-Fi signal. Then connect the iPad using the Settings app. Then fire up ShutterSnitch.

Tap on the plus sign in the upper right make a new collection. An IP address at the top of the screen shows the card connected to the iPad mini. 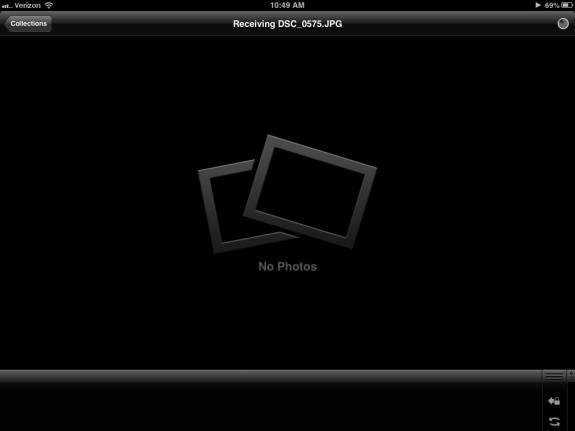 Notice it says “receiving” at the top of the screen to show the user the picture is loading from the camera.

Start taking pictures with the camera and they’ll show up instantly on-screen within a few seconds. After the app transfers the image, a toolbar shows up at the top with the following buttons.

The bottom of the screen shows all the images with small thumbnails. Tap a thumbnail to see a larger preview. 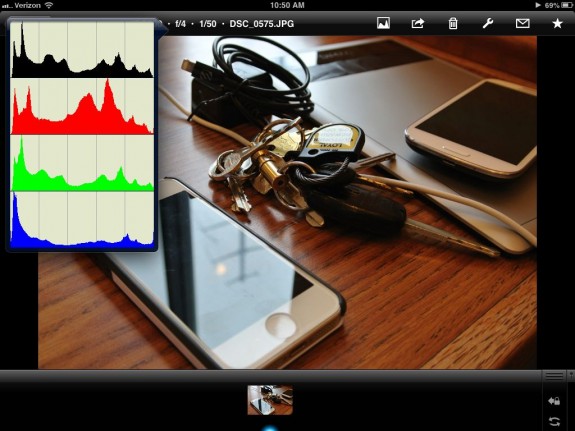 Use the histogram once the image shows up to make sure it shows a good exposure and a good white balance. Then keep shooting. When finished with the shoot, check to see if the images look sharp.

Once the image shows up in ShutterSnitch, rate the image using the star button. This gets saved to the metadata in the image and apps like Aperture on Mac or Lightroom on both Mac and PC will recognize this rating and use it in those programs.

Select the images by using the share feature save them in the iPad mini. Open up a photo editing app, like Snapseed or iPhoto. Crop the image in that app and then correct the color, exposure and add some sharpening if necessary. Do other edits as needed and then save the image.

At this point the photographer has a few choices.

The Transcend Wi-Fi SD-Card and ShutterSnitch on the iPad mini improved photography workflow in a positive way. One can get better shots because one can instantly see what is shot. Working with the images after the shoot goes faster since rating the images is easy, and one can work with the best rated shots right away. Also, friends get to see the pictures faster, sometimes instantly.

For Android users, Transcend offers an Android app to interface with the card.