The Paul Elementary School in Paul, Idaho recently ran a test pilot program with both teachers and students using the Apple iPad as their primary teaching tool. The school created a video praising the iSchool initiative saying they saw great results after just a couple of months.

Principal Colleen Johnson of Paul Elementary School found that excited teachers and students took ownership of the education process, and the students actively participated. Teachers not used to using tech found that, despite the learning curve, they’ve made it work.

The school’s IT system filters content to protect students. Students didn’t accidentally come upon unsafe websites or install apps with adult content thanks to safety protocols.

Students were able to work with apps to learn on their own, yet teachers could also gather students together to work in small groups or as a class. They used Apple TV and projectors in concert with the iPad to focus the students in class. 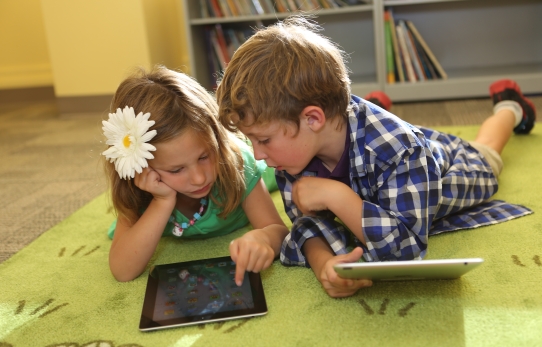 Kids work together with their iPads in Idaho iSchool

The support infrastructure provided by iSchool meant that each class got five wired lines plus a slew of Wi-Fi access points throughout the building. Education tech company iSchool Campus was the company responsible for the district’s iPad deals, and also wired the schools and offered a complete computer lab for $500,000/year. Teachers each received a computer as well as the iPad.

iSchool Campus doesn’t charge for the first year, with the assumption that the schools will pay the remaining two years of a three year agreement. iSchool Campus also buys back text books the schools no longer use, according to a report from Local News 8 in Idaho Falls, Idaho.

While programs like this sound expensive, they save a lot of money just by reducing paper. Paul’s principal put the savings at $20,000 per month due to not having to copy paper alone. In addition, they don’t need to buy textbooks.

Some school systems work directly with Apple. Burke County Schools in the foothills of Western North Carolina is a struggling school system. The local Board of Education chose to go with iPads in the classroom for money savings, as well as to streamline communication between teachers and the administration.

Burke County plans to put an iPad in the hands of every teacher at this point. Hallyburton Academy, the county’s alternative school for at risk students expelled from other schools in the county, got a few dozen iPads that students can also check out and use while at school.

John Lambert, the schools tech director, helps students gain the skills they need to use the iPads for coursework. He said that students enjoy their classwork more using the technology. They are starting to see the same kinds of success in a limited way that the other schools see using the iSchool Campus program.