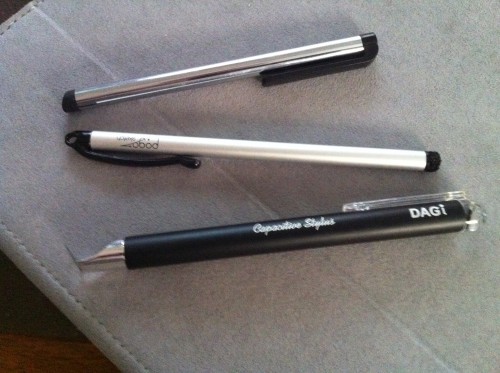 In yesterday’s post about my 4-month experiences with the iPad I mentioned I had ordered another stylus or two (I know right, the dreaded stylus, I’m such a FAIL). GBM reader Gerardo asked in the comments which ones. I’ll list both of them below, along with the three I’ve tried and worked with.

First the three I’ve tried and worked with.

At the moment I stick mostly with the Pogo Sketch because it Inks the smoothest on the iPad. That said, it’s soft conductive foam tip makes control difficult in some instances. But given my quick and dirty note taking style the Pogo Sketch works better than the other alternative I use which is…

The Milano Stylus. I had high hopes for this stylus because of its stiffer and more pointed tip. While it works well, the pressure you need to use to lay down Ink is more than I like for quick note taking. The pointed tip is deceptive, as it makes you think you can use that pointed tip for control, but you still need to put the entire surface of the tip on the screen. I use this occasionally and the recent update to Penultimate makes it easier to do so, but I find it lacking for the reasons I’ve stated above.

The Dagi Stylus. This is a unique approach to a stylus. Instead of conductive foam, there’s a plastic sphere at the end of a metal and plastic holder. There’s a little red dot on that sphere that aims you at where you want to place your input. Sad to say, this stylus just doesn’t work in my hands. I find it awkward and cumbersome and even with Penultimate’s wrist protection it doesn’t allow me to accomplish my note taking. In the picture below you can see that I’m not good at using the Dagi Stylus to lay down Ink.

The two I’ve recently ordered are:

The Boxwave Apple iPad Capacitive Stylus and the Soft Touch Stylus. I’ll be posting my thoughts once I’ve received them and given them a shot.

If any GBM customers use other styli, let us know. They might be worth me giving them a try. 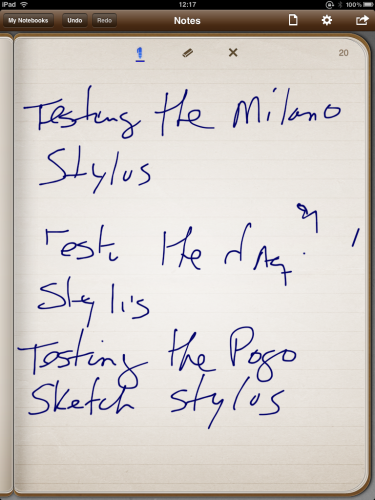