The iPad already tops the adult’s holiday wish list, and now it seems that the iPads, and by proxy the consumer tablet category, is also doing the same on kids’ wish list. 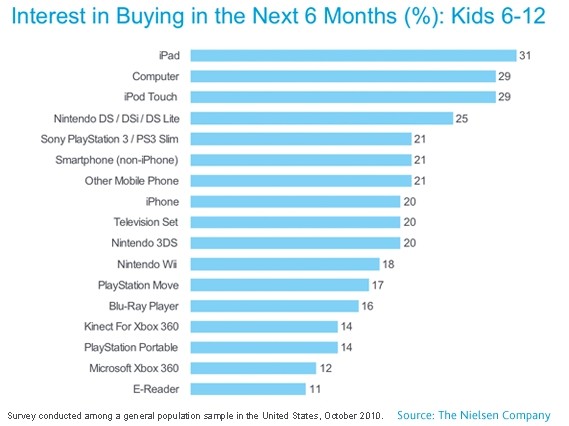 According to a Nielsen Company survey, the iPad reigns king of desire on the wish list of kids ages 6-12, being coveted above video game systems like the Nintendo DS, PlayStation 3, Smartphones, iPhones, Wii, and other systems. 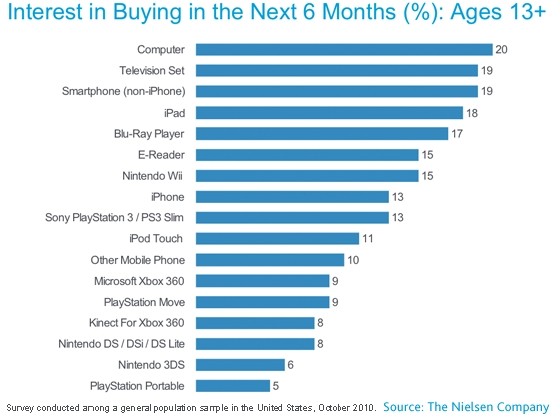 For kids 13+ the iPad and tablets came in fourth, after a computer, TV, and non-iPhone smartphone.

Traditionally, video game systems have topped the consumer desires of children. However, given the multi-purpose nature of iPads and other consumer tablet systems, along with their afforded portability and usability as gaming systems, it’s not too surprising that the iPad is rising to the top. According to id Software co-creator John Carmack, graphics and gaming power of the iPad rivals some of the best home gaming console available today:

It is great for me to see a lot of people saying this looks better than anything on my Wii and a quarter of the games on my 360, which is about how I would rank the power levels there. You should be able to do something that’s better on an iPad than anything that’s done on the Wii. A 360 or PS3 does have several times integral-multiple more power but there’s certainly some games where developers don’t take much advantage of it. We’re nowhere close to maxing out what could be done on an iPad.

The referenced Nielsen survey tracks what these youth age groups are interested in purchasing over the next six months.