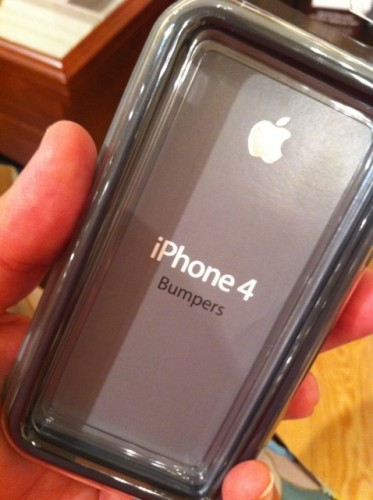 So I was out at a local festival today and opted to bum around the Apple Store while my wife went to Pottery Barn (again). Seeing a whole column of Bumpers on the shelf, I took advantage of the opportunity and bought one. While it fulfills the purpose of the purchase, I was surprised to discover its rubber and plastic shell is no match for my signal-killing Death Grip.

As I stated previously, while I appreciate the strength of the iPhone 4’s steel frame, I do find it uncomfortable in hand. Interestingly, the genius who processed my purchase brought up the comfort problem without prompting. In addition, the lustrous glass panels make it impossible to rest my iPhone on a curved surface, such as the arm of my sofa or the leg of me. The Bumper addresses both of these issues very well. The feel is much closer to that of my familiar and comfortable 3G and my one-thumb typing style is back up to speed.

I had initially planned on holding out for Apple to give away Bumpers to address the antenna Death Grip problem. But since Apple was kind enough to give me 40 SIM cards, which people actually pay money to buy on eBay, I figured I’ve already been compensated. That seems to have been the smarter decision since the Bumper has fallen to the might of my Death Grip.

While a case or covering has proven effective for others, including Warner, I can still drive down the bars through the Bumper using the left-handed so-called Death Grip. The grip is less effective, dropping two bars from three but not killing the signal unless it’s already at one bar (my results at this level are inconclusive), but it still works as quickly as without the Bumper. This pokes a giant hole in my prior belief that contact with the frame was a necessary element. I must conclude that, at least in my case, the problem does stem from my hand blocking the antenna.

I no longer believe the external nature of the antenna is a direct cause here but rather a contributing factor. Being on the outside, the antenna is easier to envelop with one’s hand. The Bumper and other cases add distance from the hand, very little but apparently enough to keep it from entirely blocking the signal. I’m sure there are others affected by this problem differently. For example, simply bridging the two antennas is not enough to affect my signal like it does for others.

Regardless, the Death Grip problem has been primarily an intellectual exercise for me. It only affects my iPhone when held in a precise manner that I would not normally use. That particular grip is not natural for me and only seems effective in my left hand, while I’m a righty who practices and preaches one-handed operation of touchscreen handhelds. My only real problem were the hard edges and slick back panel, which the Bumper has solved. Of course, there’s always a trade-off: the opening for the dock connector is too narrow for my old iPod cables. Seems fitted specifically for the iPhone cable with the smaller dock connection. It’s always something…