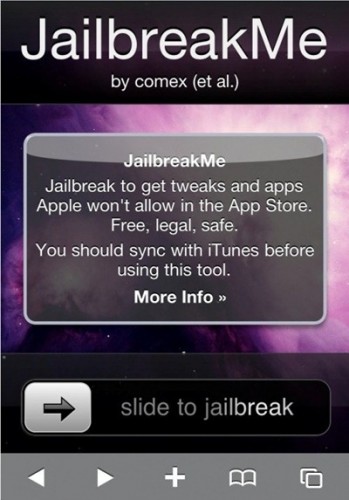 News of a successful and easy-to-apply jailbreak for the iPhone 4 and other iOS devices lit up the Internet, followed quickly by news of patches for broken functionality, FaceTime calling over 3G, and a malicious exploit with an opponent named Warner.

Kicking things off was the launch of JailbreakMe.com (via Engadget), a website that jailbreaks (unlocks root access) to your iDevice up to the iPhone 4 running the latest version of iOS. I don’t know exactly how it works, but it all happens through the Safari web browser, which means exploiting a security flaw to initiate the process. You do risk bricking your iDevice and/or voiding your warranty with a jailbreak, not to mention leaving your device vulnerable if you don’t change the root password. There’s no longer a law against jailbreaking your iPhone, but that doesn’t eliminate all the risks involved. If all that raises a red flag for you, good. I really don’t advocate any hacking that’s beyond your ability to understand, so just make sure you’re cool with everything good and bad before taking the plunge.

On the good side of things, jailbreaking your iPhone 4 enables FaceTime calls over 3G using an app called My3G. The app lifts WiFi-only limitations and allows connections over 3G. This expands functionality in a variety of apps, such video and file transfer, but the big lure for now is that FaceTime calls aren’t limited to Wi-Fi hotspots. It should be noted that Apple cited the need to work out the business details with carriers as the reason behind the Wi-Fi-only limit, so FaceTime via 3G is expected to be standard at some point. My3G should be considered a temporary solution until then. Also note, the data usage of FaceTime is calculated at around 3MB per minute, so keep that in mind if you’re on a metered data plan. Video at 9to5 Mac.

And on the bad side, there’s already report of black hats copying the work on JailbreakMe to build their own jailbreak system to load malicious code into iDevices. Since it uses the same exploit, you do need to visit a particular website to get hacked, but it’s so easy to bounce around the web, we really should be aware that this danger is out there. Fortunately, there’s a defense named “PDF Exploit Warner” (for jailbroken devices) that can at least warn against attempts to exploit this flaw. (Okay, technically it’s a descriptive term, not a name, but where’s the humor there?) But there is no fix until Apple patches this hole (and breaks the JailbreakMe system in the process).

Ultimately, you jailbreak at your own risk, and like all risks, there are trade-offs in greater rewards and higher potential for loss. So if you’re considering it, it’s worth your time to look at both ends and determine for yourself whether you’ll get enough reward for the risk.