A Colorado woman found out that her iPhone 4 can spontaneously combust and explode overnight while charging. The 51-year-old woman was traveling and staying in a hotel when the phone had burst into smoke while it was charging on a bedside table about a feet away from her head. According to the frazzled woman, she had awoken at 6:03 AM to a strange smell and some sizzling, popping, and immense crackling noises and the room was filled with smoke.

In an interview with Mashable, the woman had asked to remain anonymous, telling the site, “It was an awful, putrid smell, almost like you were ingesting plastic of some kind.” 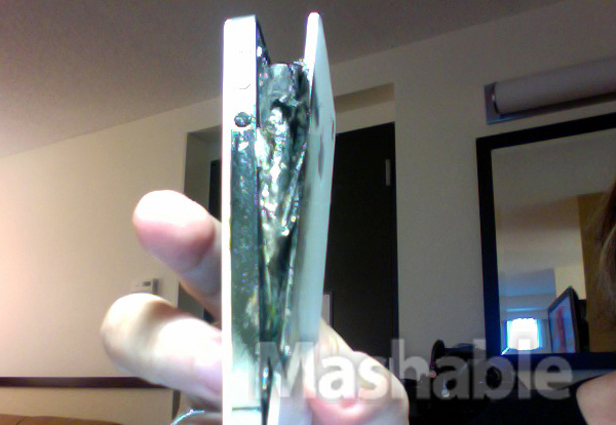 To put out the disaster, she had used her laptop case to grab the phone, pull it from its chargers, and threw it into the sink. According to the hotel electrician, there was noting wrong with the power, though hotel smoke detectors did not work when the incident occurred. 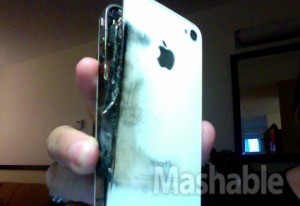 The woman is coming out to the press with her report in an effort to compel Apple into warning customers about the possibility that other iPhone 4 devices may be affected by explosion or combustion. Even if Apple does warn customers of such dangers, I can only imagine it would be buried in fine print or hidden somewhere in the company’s website and not boldly displayed like the health warnings issued by the Surgeon General on cigarette packages sold in the U.S.

The issue has been reported by iPhone 4 users in Brazil and Australia in the past, and this is the first reported incident in the U.S.

“I would have liked to have seen them say they understand this might not be something that affects everyone,” the woman said. “But, because it happened here, [they should] put up a precautionary statement to make people aware that if their battery becomes too hot to be wary.”

Apple had issued the woman a replacement iPhone 4 instead of the iPhone 4S requested by the victim. So far, it appears that the iPhone 4S does not suffer from the same combustible fate that an iPhone 4 may. Apple has not commented on the matter.
Related Topics:AppledefectfailureHardwareiOSiPhone 4