For the first time, you can purchase an iPhone on each of the three largest carriers in the U.S.

The iPhone 4S is essentially the same device on each of these networks, but the iPhone 4S speeds vary, sometimes drastically, between the carriers.

Below are speedtests from a rural area, Bluffton, Ohio, which recently had AT&T 3G turned on.

To test out these speeds, we used two new iPhone 4Ss from Verizon and AT&T to test the speed of both 3G networks in Bluffton Ohio. This is a rural community, which has good 3G coverage from Verizon and AT&T. Both of these phones were purchased by GottaBeMobile staff, the Verizon iPhone 4S is the 64GB model and the AT&T is 16GB. WiFi was turned off, and other apps, which could use data, were turned off.

Here’s a video, showing the iPhone 4S running the Speedtest.net app at the same location. I ran the test mutliple times to account for variances in network traffic.

You can see the iPhone 4S Speedtest on our Verizon iPhone 4S, AT&T iPhone 4S and for comparison, the HTC ThunderBolt is tested on Verizon’s network. This phone can connect to 4G, but this test was run on Verizon 3G because there is no 4G coverage in this area. 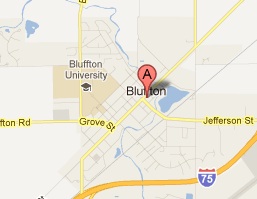 Just like in our iPhone 4S Speedtest in San Francisco, AT&T was way out ahead in terms of downloads. The highest AT&T iPhone 4S speed was 6.30 Mbps, which is over 5 times  faster than the best Verizon iPhone 4S speed of 1.26 Mbps.

The AT&T iPhone 4S also took the lead in the upload category, with a top speed of 1.68 Mbps — twice as fast as Verizon’s top upload speed of .54 Mbps. These speeds matter when you want to email large files, upload photos to Flickr and upload videos to sites like YouTube.

These results will vary from city to city and even from block to block, but in this area, AT&T has the fastest network. This means that you can download apps much faster, enjoy better quality Netflix streaming and get faster connectivity when you use your iPhone 4S as a hotspot.

The iPhone 4S Speedtests run here are actually much faster on Verizon than at home, where I was lucky to get .50 Mbps down and .49 Mbps up. These speeds can vary over the matter of a few miles, and especially 15 miles away. Keep that in mind before you purchase a new iPhone 4S based on a single speed test or anecdotal speeds from those around you. You can read more about the earlier iPhone 4 3G speed tests here. 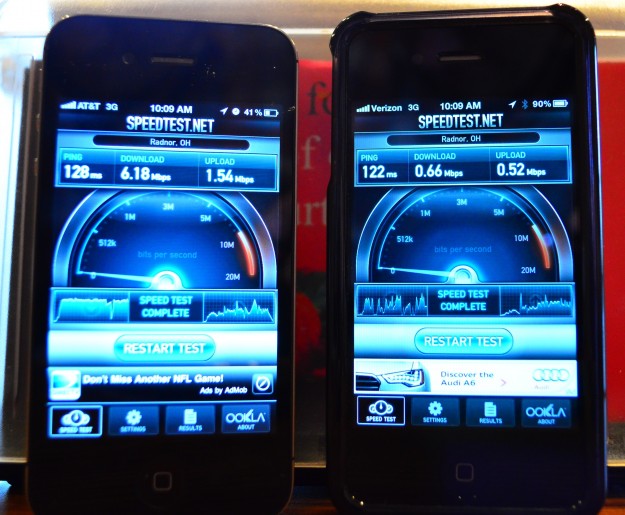