As I’ve been using my iPhone 4S instead of the Canon SD1400IS for my all-purpose point and shoot camera and I’ve noticed something: the camera lens is in the wrong place.

It just feels off.

I tried shooting with the lens on the upper left with the volume buttons on the bottom. You have to use your thumb to press the volume button and that’s awkward, but helps me frame shots better. Shooting this second way is still a bit problematic, as my fingers keep getting in the way of the lens. Neither way of holding the iPhone 4S to shoot pictures is convenient because of the placement of the lens. 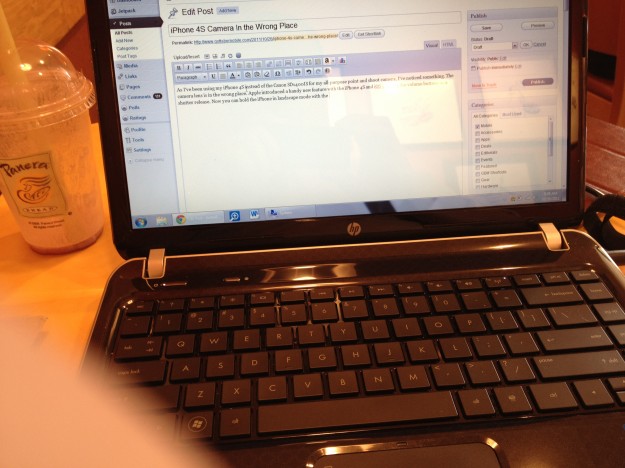 As lenses on smartphones get better and phones become thinner, the placement of the lens may become even more problematic. I wish all smartphone makers would consider the lens placement in their designs. The optimum placement would be equidistant from both long edges and at least a third of the way over from the shorter edge of the phone. 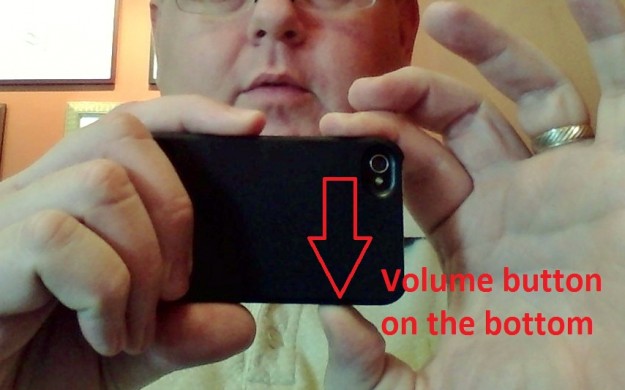 The camera on the iPhone 4S is so good I want to use it more. I’ve found that the best way to hold the camera is to have the volume buttons on the bottom and place your thumb over one to take a shot. Put your left index finger on the top with your other three fingers away from the phone. This solves the old finger in the shot problem. Hold your thumb along the bottom edge with the lower right corner resting flush with your hand. Put your index finger along the top edge and use your ring finger behind the phone to hold it in place as it rests against the back of the phone. This gives me the least amount of shake while shooting photos and keeps my fingers out of the frame. Having the lens on top makes framing photos less awkward. I tap the screen with my left finger to focus holding the phone firmly with my right hand.

If using your thumb to press the button feels strange to you, then you can reverse this to use your right finger to press the volume button with it on the top instead of the bottom.

We at GottaBeMobile agree that all phones should allow you to use the volume button as a shutter release instead of a zoom function, as some Android phones do. It also makes more sense to have the lens placed so that the buttons are on top, just as is the lens. Even better: phones should move the lens further towards the center of the back of the phone like it would be on a point and shoot camera.