While work continues on the iPhone 4S jailbreak untethered for iOS 5.1 we continue to see claims of iPhone 4S unlock tools capable of unlocking the iPhone 4S on the latest software.

Many of these claims show up in the news section of Google, at the top of searches for, “jailbreak iPhone 4S” and “iPhone 4S Jailbreak”.

These claims most often appear on PRweb.com alongside press releases that appear convincing and  on local newspaper websites, posted as blog updates by local readers hoping to cash in when a user clicks or buys the fake iPhone 4S iOS 5.1 jailbreak. 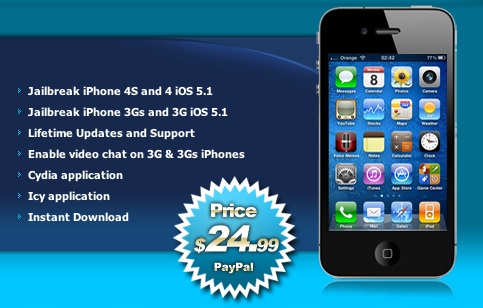 Screenshot of one site claiming to sell an iPhone 4S Jailbreak for iOS 5.1

I see two to three local newspaper sites with fake iPhone 4S jailbreak claims per week. Most of the time the pages are pulled within a day, but a new one just pops up a few days later.

There are many things wrong with these iPhone 4S claims, posts and tools.

The biggest issue is that there is no way to jailbreak the iPhone 4S on iOS 5.1 available to the public. The best team of hackers is already working on an iPhone 4S jailbreak untethered for iOS 5.1. According to Pod2g the iPhone 4s jailbreak release date is weeks to months away.

This makes the claims of a “Successful Jailbreak and Unlock for iOS 5.1 for iPhone 4S/4/3GS” false and a blatant attempt at taking money from unsuspecting users.

Most of these sites claim to offer a money back guarantee, but I wouldn’t want to test this policy.

When there are new iPhone jailbreaks, they are released for free by one of the iPhone hacking teams, kept for personal use or sold to an underground seller for $250,000.

If you don’t work in security or plan on need to employ a iOS exploit for secret agent activities there is no need to buy an iPhone 4S jailbreak.

It’s unlikely that iPhone jailbreaking will ever feature sales of legitimate software. According to Stefan Esser, @i0n1c on Twitter, any sold jailbreak will be pirated and it would be difficult to raise the amount of money available from an underground seller.

But Kickstarter is not available for germany. So this means if you sell a JB to the community of leeches it will just get pirated.

Instead of paying for a dubious iPhone 4s jailbreak, wait for the iPhone 4S jailbreak for iOS 5.1 release from Pod2g and others who release free tools to the public.