Today, Apple released iOS 6, its new mobile operating system for the iPhone, iPad and iPod touch. Those who wish to keep their device their device jailbroken will not want to install iOS 6 and will instead want to remain on iOS 5 until a jailbreak for iOS 6 becomes available.

As usual, those who want to jailbreak their phone will have to remain on versions of iOS not called iOS 6. Those who wish to jailbreak who haven’t yet will need to get iOS 5 before the window closes.

According to MuscleNerd, a renowned iPhone hacker, those who currently are using the new redsn0w will be able to re-restore to 5.1.1 at will. He also says that news regarding iOS 5 and iOS 6 restores will come soon.

iOS6 is out!JBers get to 5.1.1 before window closes.Stay tuned for redsn0w news that will help many with iOS5/iOS6 restores

We’ll have a blog post soon on precisely what RE-restore means, but for now please just stay on 5.1.1 and save those 5.1.1 blobs :)

Of course, even the iOS 6 GM jailbreak is far from perfect. The redsn0w 0.9.13dev4 iOS 6 jailbreak tool will jailbreak iOS 6 on a handful of devices, but according to the software’s release notes, not everything is working. In addition, users should know that the jailbreak is tethered which means that you’ll have to plug in every time your phone shuts off. 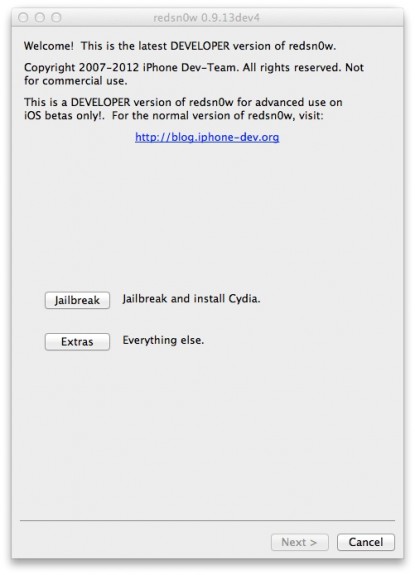 iDevice jailbreakers will want to skip iOS 6 for now.

The jailbreak process for the iOS 6 GM is not an easy one and as of yet, it does not include the unofficial app store, Cydia.

So, at this point, unless you desperately want to jailbreak your device running iOS 6 GM, it’s probably not worth the trouble.

As for a release for the consumer version of iOS 6, nothing is known yet though we imagine that we should get some news in the near future from MuscleNerd, pod2g or p0sixninja. Those interested in jailbreaking iOS 6 will want to keep an eye on them because until the official iOS 6 jailbreak is released, users that rely on jailbreak apps should only stick with iOS 5.1.1.