Apple is keeping the aging iPhone 4S around for another year. This year’s iPhone hardware will comprise of the iPhone 5S at the high-end, a mid-range iPhone 5C, and the iPhone 4S will be the entry level model this year. In an odd twist, with the iPhone 5C, Apple had killed off the iPhone 5 that was introduced about a year ago.

So while Apple didn’t introduce a super cheap iPhone to meet the masses of the emerging markets, the iPhone 4S will fill that gap today. No contract pricing was not announced for the iPhone 4S at the launch event. 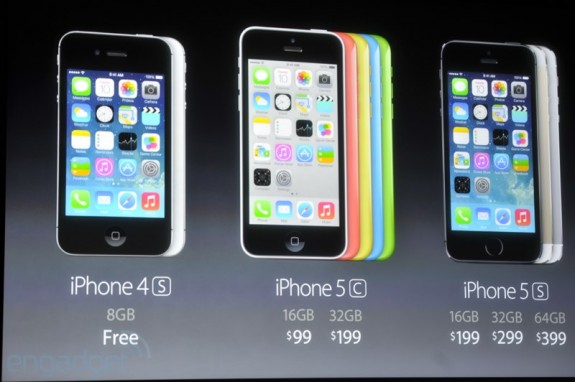 The 8 GB iPhone 4S will continue to be sold in retail stores for the price of free with a two-year service agreement. The mid-range model will get two prices–a 16 GB for $99 and a 32 GB edition of the iPhone 5C for $199. The iPhone 5S will start at $199 for 16 GB of storage and the flagship model will go all the way up to 64 GB to cover various storage needs.

With the iPhone 4S rounding out this year’s lineup, all of Apple’s 2013 model phones will be shipping with Siri on board–last year’s iPhone 4, iPhone 4S, and iPhone 5 lineup saw the low-end of the spectrum without support for Siri as Siri is only available on iPhone 4S or later hardware.