The iPhone 4S is achieving sales record, and according to the carrier, it is now the best-selling device on Sprint’s lineup, dethroning the popular HTC EVO 4G, which is now over a year old and is also the best-selling smartphone on manufacturer HTC’s lineup. In Sprint, the iPhone 4 and iPhone 4S models have found a powerful ally as the nation’s third largest carrier is now the sole national carrier to offer truly unlimited smartphone data without throttling. These models–the new iPhone 4S and last year’s iPhone 4 turn-budget-friendly entry level option–have achieved record-setting sales both in-stores and through telephone orders.

“Sprint today reported its best day of sales in retail, web and telesales for a device family in Sprint history with the launch of iPhone 4S and iPhone 4. We reached this milestone at approximately noon CT/1pm ET. The response to this device by current and new customers has surpassed our expectations and validates our customers’ desire for a truly unlimited data pricing plan.” 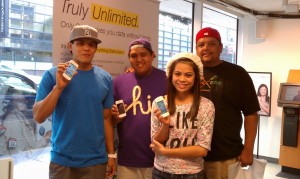 Family of four said that they'd only adopt the iPhone if it ever came to Sprint. Image courtesy of Caroline Semerdjian.

According to local PR manager Caroline Semerdjian, a Sprint retail store located near downtown San Francisco had sold out of the device by around 10 AM, approximately two hours after the device had gone on sale, and the experience is similar at other stores across the country.

Customers at the store highlighted reliability of service, affordable price, national coverage, and unlimited data as selling points to switching to Sprint. In addition to a large coverage footprint, customers also complimented Sprint on its customer service. Retail store employees noted that although lines stretched around the block at various stores, the carrier’s unlimited data plans prompted a lot of switchers from rivals such as AT&T, T-Mobile, and Verizon, so the process of porting numbers slowed down the sales queue a bit.

In a success story for Sprint’s Network Vision, a family of four visiting from Texas had lined up to adopt the new white iPhone 4S on Sprint’s Now Network. The reason? Dad told his kids that he’d only let them have the iPhone if it came to Sprint, and fortunately for the young ones, that dream came true this Friday. The father had said he preferred Sprint over rivals due to strong customer service.

At other stores, enthusiasm appears just as strong, and Apple’s popularity among smartphone shoppers only appear to continue to rise as the flagship smartphone further evolves itself to offer better user experiences with improvements to the camera, notifications, voice control with the addition of Siri, faster processor, and a leading App Store. With the iPhone being popular on Sprint, it’s still too early to tell what the impact will be on Sprint’s strong Android smartphone lineup, which includes devices from LG, HTC, Samsung, Motorola, Kyocera, and others.