The speed of your iPhone 4S, or any Android phone, is dependent on the network you have backing up your browsing and downloading. While there’s no arguing with the appeal of the iPhone 4S, speeds can vary greatly from city to city. Even the faster AT&T iPhone 4S has trouble keeping up with the speeds of Verizon 4G LTE.

Verizon’s 4G LTE network still has holes. But if you are one of the 186 million people covered with 4G LTE, and you absolutely need the fastest speeds, you should consider a 4G LTE smartphone from Verizon (or at least a 4G hotspot).

While the AT&T iPhone 4S achieved impressive 6Mbps speeds in our first iPhone 4S speedtest in the Midwest, the speeds slowed down as I drove to Columbus Ohio to test out Verizon’s 4G LTE network.

Read on to see how the iPhone 4S on Verizon and AT&T stack up to the HTC ThunderBolt’s 4G LTE connectivity.

You can see the results of our Speedtest.net results below, comparing the AT&T iPhone 4S, Verizon iPhone 4S and the HTC ThunderBolt on Verizon 4G LTE. These tests were run indoors, in Columbus, Ohio.

These speed tests were completed indoors, in a mall food court, where you might want to catch up on some work or watch a Netflix episode while you grab a quick lunch. The 4G LTE speeds blew both iPhones out of the water, though these speeds were closer to the AT&T iPhone 4S speeds we saw in Bluffton, where AT&T had just rolled out a 3G network in the past few months. I would have expected a faster upload speed over 4G LTE, but multiple tests in this location showed us that we can’t always expect the fastest speeds we have seen in other 4G LTE areas.

As Xavier explained in his iPhone 4S vs. Droid Bionic 4G LTE speedtest in San Francisco, there are several reasons why Apple decided to pass on 4G LTE, but battery life is up near the top.

Even in 3G areas, I had to double the thickness of my HTC ThunderBolt to get through an average day, by spending $40 on an extended battery. The iPhone 4S, on the other hand, allows me to get through a full day of medium usage. While battery life has improved a bit on the Droid Bionic and newer 4G LTE devices, it is still a major issue. 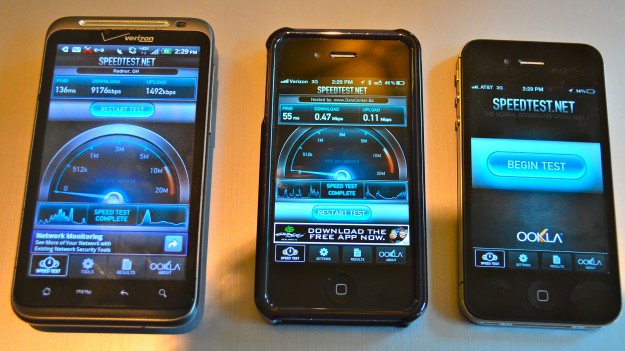 When it comes to mobile browsing Apple has done a good job of speeding up Safari, for faster browsing, but the 3G speeds will still limit uploads and downloads of apps and media. If you need to use your phone as a hotspot, you may be better off looking at a 4G LTE smartphone, or purchasing a dedicated 4G LTE hotspot. The Motorola Droid RAZR and Samsung Galaxy Nexus look like the current top 4G LTE picks for Verizon, though you’ll need to wait a few more weeks to purchase them.

Here’s to hoping we see a 4G LTE iPhone in 2012, when both AT&T and Verizon will have greater 4G LTE coverage and more efficient 4G communication should be possible.