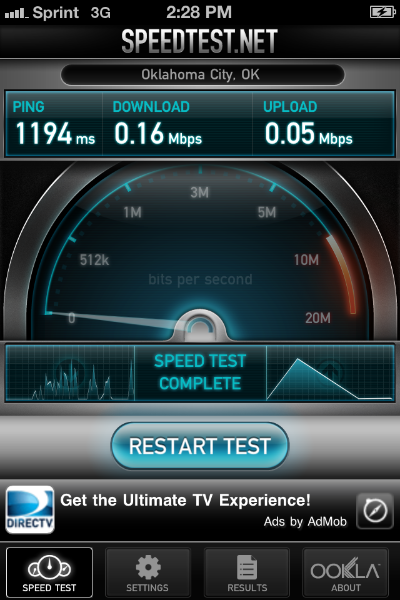 Sprint set sales records with the introduction of the iPhone 4S yesterday, at least in part because it’s the only carrier to offer unlimited data for new iPhone customers. Unfortunately, reports are coming in that Sprint’s 3G network is extremely slow for some iPhone 4S users, making it impossible to use some of the latest iPhone’s core features, such as Siri.

Customers across the United States are complaining of shockingly slow upload and download speeds, even in locales where their other smartphones are performing quite well on Sprint’s 3G network.

Over at the Sprint Community forums there’s a raging discussion thread on the topic of slow 3G speeds.  How slow are we talking about? According to the Speedtest.net tests many users ran, the Sprint version of the iPhone 4S is clocking in well below .30 Mbps on the download side of things and under .10 Mbps for uploads.

Network congestion could certainly be part of the problem, with a large number of Sprint customers activating their iPhones for the first time and testing out their favorite features.

Have you tired Siri?  It will say “Sorry I am having trouble connecting to the network”.  This speed is ridiculous, too slow to use the function provided by iPhone.  I couldn’t even imaging how would navigation work at this speed when it has to load maps on demand.

Obviously iPhone 4S users want to be able to access the Internet and have other options. AT&T locked in many irritated iPhone customers for the first few years of the iPhone since it was the only carrier that sold Apple’s devices until earlier this year, but that’s not the case any more. Sprint has a very limited amount of time before some customers seek greener pastures.

Using the iPhone 4S in Orange California, Speed results are anemic at best..  0.10 Mbps down, 0.06 Mbps up, since Siri requires network connectivity, I am unable to use it, might have to switch back to T-Mobile….or Verizon if I want to keep an iPhone 4S…

While part of the problem could be network congestion, many Sprint customers participating on the discussion thread at Sprint Community and elsewhere are complaining that their non-Apple smartphones are running significantly faster on Sprint’s 3G network at the same locations as where they’re testing their iPhones. Speedtest.net results will vary dramatically depending on your location, network conditions and which test server is being used.  But there’s clearly something wrong her for at least some Sprint customers.

Sprint’s iPhone 4S plans with unlimited data start at just $79.99. By comparison, AT&T’s data plans start at $15 (200MB ) and Verizon’s start at $30 (2GB), plus the cost of  your choice of voice and MMS plans.  You can read more about each carrier’s plans and the trade-offs in this iPhone 4S carrier comparison article.

As we reported earlier, AT&T seems to be the fastest iPhone 4S 3G provider, beating Verizon handily in some locations. Of course AT&T’s 3G network doesn’t hold a candle to Verizon’s 4G LTE network, but the iPhone 4S is a 3G-only device.