Apple will announce the iPhone 5 or the iPhone 4S at an event on the Apple campus at 10 AM Pacific time today, but the lack of an announcement hasn’t stopped individuals across the globe from camping out for the next iPhone.

There are already at least three people lined up for the iPhone 5 — two in New York City and one in London. Here’s a closer look at these foolhardy individuals who are camping out for the iPhone 4S or iPhone 5.

The lack of an official announcement to tell us which iPhone we will see makes the line waiting even more interesting, but based on our past chat with one of the iPhone 5 line waiters, we’re pretty sure any new iPhone will be counted as a win. 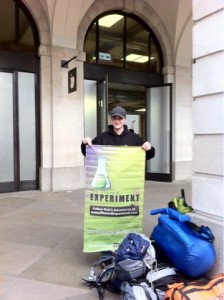 We interviewed Rob Shoesmith earlier this year about his plans to camp out for the iPhone 5, no matter how long it takes. Shoesmith has been loitering around the Regents Street Apple Store in London since early August.

Rob has been depending on sponsors and strangers to prepare for the long haul, which officially begins today as he has secured the number one spot in line. If you are in London, stop by and wish Rob luck or tweet him support on Twitter @shoesmith81.

As part of his wait in line, Rob has scored a mankeeni, similar to what Borat wore, but thankfully he won’t be wearing it, or at least just the mankeeni, in line. Check out our interview with the first man in line for the iPhone 5 and the iPhone5experiement.com for more information.

Closer to home, Keenen Thompson, a former Apple store employee and blogger, and Jessica Mellow, a body artist are lined up in New York City to wait for the iPhone 5.

Here’s a quick chat with the first two in line for the iPhone 5 in New York City, you can follow their experience at the iPhoneWhatever blog.

Gazelle, a gadget buying company that will pay cash for your old iPhone, is sponsoring the pair of iPhone line waiters, who have been in place since Monday.

Jessica Mellow writes in, “We are EXCITED for the announcement! Freezing, but stoked.” adding, “We’re crossing our fingers for a release date soon!”

Getting the new iPhone on launch day is a big deal for iPhone owners, but not everyone is willing to stand in line — even for a day.

One of our recent surveys found that 44% plan to camp out at their local Apple store or at their local Verizon, Sprint or AT&T store to get the iPhone 4S or iPhone 5 on launch day.

When we delved into the mind of the iPhone 5 buyer, we found that over 50% of iPhone buyers can’t wait to get the iPhone 5. Nearly 40% will pre-order if possible, and nearly 11% will head out and wait in line as their first choice for getting the new iPhone. 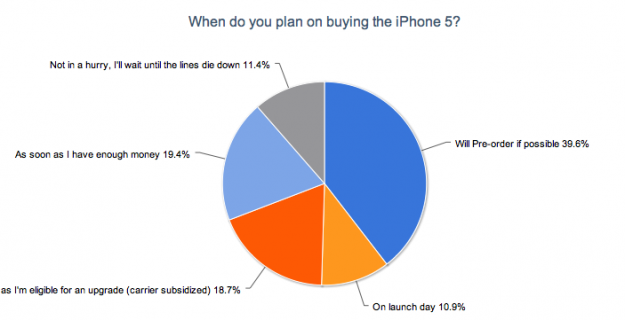 When Do You Plan On Buying the IPhone 5?

Apple is holding an iPhone event at 10 AM Pacific today where we expect to learn about the new iPhone 4S or iPhone 5 and the new features. This is Tim Cook’s first major event as the CEO of Apple.

We have to ask, tell us in the comments how long you woud be willing to stand in line.