iPhone 5 and Samsung Galaxy S III May Be Waterproof

Earlier this month, we told you about Liquipel which is a patent pending process designed to coat Apple’s iPhone and other gadgets in a waterproof “nano” coating. The coating works both inside and outside the device to keep it safe from moisture. The coat is supposed to be unnoticeable and while substances like water will still be able to run through your phone or tablet, it will protect it from damage.

According to a new rumor, both the Apple iPhone 5 and Samsung Galaxy S III will come with this Liquipel coating on board, perfect for those of you that have a habit of dropping your phone into giant vats of water. 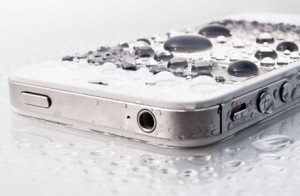 The source of this rumor is someone that Today’s iPhone says is a “well-placed in one of the UK’s top independent phone retailers” who correctly provided the launch dates for the iPhone 4S and white iPhone 4. Translation: Take all of this with a grain of salt, like you would any Apple or Galaxy S rumor.

We can’t help but get excited though.

As of right now, there are only a few devices on the market that are waterproof,  none of them are as big as the iPhone or the Galaxy series.

So, if Apple and Samsung have truly signed on to include this technology, we could see it take the market by storm in 2012 and beyond. Indeed it would be nice to see waterproofing technology extend beyond devices like the Casio G’zOne Commando which you can see in action below.

Curious about the effectiveness of Liquipel? How about a demonstration video to quell your doubts?

Below, you’ll see that an iPhone 4S coated in Liquipel is able to sit underwater and play video. Obviously, iPhone 5 and Galaxy S III owners aren’t going to submerge their phones underwater to watch content but the demonstration does show just how effective Liquipel would be at preventing water damage.

The iPhone 5 is currently rumored to be out either this summer or this fall with 4G LTE capabilities and a possible re-design and the Galaxy S III is currently slated to be out sometime before the end of the first half of 2012.

As for Liquipel, it’s actually available this moment. If you send in your device and $59, you can coat your phone in the invisible water repelling substance.