Apple claims the iPhone 5 battery lasts longer than the iPhone 4S despite a larger display and power-hungry 4G LTE connection.

Now that the first iPhone 5 reviews are up, there are finally a good number of iPhone 5 battery life reviews to highlight how long we can expect the iPhone 5 to last. 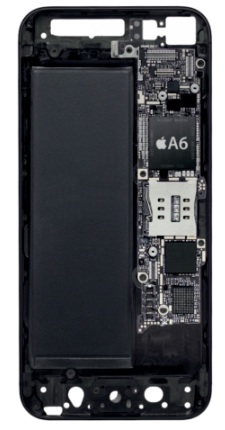 Here’s how Apple tests the iPhone 5 battery to come up with the battery life ratings.

iPhone 5 battery life is of particular note because there is no way to replace the battery when it runs down. We expect iPhone 5 battery cases, but most users will want to use the iPhone 5 without a battery pack case.

Based on the early iPhone 5 reviews, battery life looks promising, though we are looking forward to seeing more iPhone 5 units in the wild before proclaiming Apple’s battery claims on the mark.

On our standard battery rundown test, in which we loop a video with LTE and WiFi enabled and social accounts pinging at regular intervals, the iPhone 5 managed a hugely impressive 11 hours and 15 minutes. That’s just 10 minutes shy of the Motorola Droid RAZR Maxx.

Jim Dalrymple at The Loop

I use my iPhone 5 to make phone calls, iMessage, text, Web browsing, email, Twitter and generally keep up-to-date with what’s going on around the world. I unplugged my phone from the charger at 10:00 am, used it all day doing the things described above and then waited for it to run out of battery.

It wasn’t until about 7:00 am the next morning that it finally died. I didn’t watch any movies or intensive things like that, but I had Wi-Fi and Bluetooth on. Basically this was real-world usage testing for me. It was a normal day.

Battery life seems good, exactly on par with my 4S.

In practical terms, you encounter fewer days when the battery dies by dinnertime — a frequent occurrence with 4G phones.

Walt MossBerg at All Things D

The iPhone 5’s battery lasted between 9 and 12 hours every day, in mixed use. For most people, the phone would last the day without recharging.

While it’s hard to judge against a year-old iPhone 4S, the battery seems to be a bit better than it was a year ago (though there were some iOS issues as well). Apple claims 8 hours of 3G and LTE usage, and that seems about right.

In our testing, real-world battery life doesn’t seem to have changed much since the iPhone 4S, which could be seen as a good thing considering the iPhone 5 is a more advanced product, but you’ll still need to charge it every night to give you enough juice for the next day.

You can watch a couple of films on a flight or listen to hours and hours of music on one charge, but talking and 3G surfing take a heavier toll, and 4G connectivity could be even more of a drain.

Overall it looks like the iPhone 5 will last a full day of use for most users. Heavy users may need to plug-in, especially if they rely on 4G LTE throughout the day. For these users, an iPhone 5 Mophie Juice Pack is high on the wishlist.