Earlier today, we learned that Sprint was likely going to be offering up the iPhone 5 with unlimited data plans. That’s pretty exciting news. Well, that’s not the only exciting Sprint iPhone 5 news today. Nope. SprintFeed has gotten their hands on an internal Sprint document that indicates that the carrier is expecting a major phone launch in October and thus, the carrier blacking out dates from September 30th to October 15th.

Blacking out, of course, means that Sprint will not be allowing time off during those blackout days. Those dates also seem to indicate that the iPhone 5 will likely be launching in October and that it will be landing on Sprint by October 15th. 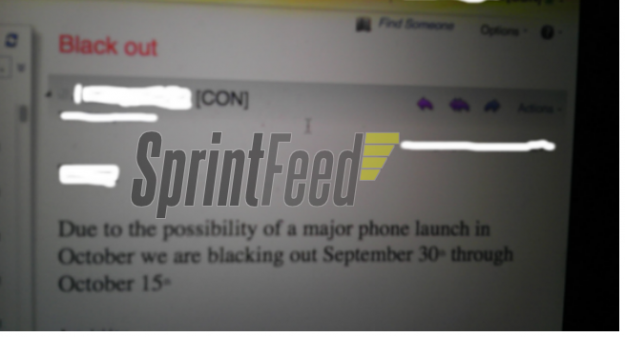 Of course, it’s also possible that this is another phone entirely but we don’t know of any massive releases coming up besides the Galaxy S II Epic 4G Touch and that’s arriving in mid-September.

These blackout dates coincide with all of the iPhone 5 launch date rumors and thus, I think we can safely say that this has something to do with the next iPhone.

A Sprint iPhone by October 15th?

That has to be exciting, right?