A recent report from Strategy Analytics shows the iPhone 5, and even the iPhone 4S, outsold the Samsung Galaxy S3 in the fourth quarter of 2012.

According to the firm’s research Apple shipped 27.4 million iPhone 5 units in Q4 2012, capturing 12.6 percent of the smartphone market. In the same time period the firm says Apple shipped 17.4 million units of the iPhone 4S. 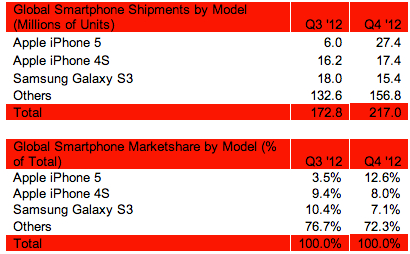 If Strategy Analytics’ estimates are correct, it means the iPhone 5 was the best-selling smartphone in the world in the last quarter of 2012. Apple introduced the iPhone 5 in the middle of September 2012, or just a few weeks before the end of Q3 2012. Supply constraints made it difficult for Apple to produce enough iPhone 5 units to meet demand during the first few weeks.

It appears that during the same time period demand for the Samsung Galaxy S3 diminished, either because of the new iPhone 5 or because users who wanted to buy the phone already did so in the previous quarter.

Samsung launched the Galaxy S3 in May 2012, and Strategy Analytics said it claimed the top spot in Q3 of 2012.

Samsung will try to regain the title of best-selling smartphone with the Galaxy S4, which it will likely launch at an event in New York City on March 14. The rumored smartphone will likely have a 5-inch 1080p display and use Samsung’s latest Exynos Quad processor. Other rumors say the phone will use a new 13MP camera and run Android 4.2 Jelly Bean with the latest version of TouchWiz Nature UX (or whatever Samsung calls the new version).