iPhone 5 Giveaway: Enter to Win an iPhone 5 Before It's Announced

With the iPhone 5 release date fast approaching, you have a chance to win an Apple gift card from GottaBeMobile in time to purchase an iPhone 5 on release day.

All you need to do to enter is answer a short survey about your plans to purchase an iPhone 5 or other phone. The survey takes about 5 minutes to complete, and could help you get an iPhone 5 on release day.

Apple is planning an iPhone event for October 4th, where the company will “talk iPhone.” Tim Cook, Apple’s new CEO will take the stage at Apple Headquarters to introduce a new iPhone and iOS 5. 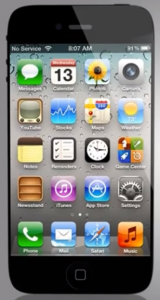 Win an iPhone 5 from GottaBeMobile

The iPhone 5 is expected to have a faster processor, which translates into snappier performance and prettier graphics, an upgraded 8MP camera, new antenna design and may be a world phone. The iPhone 5 is likely to come in white and black with a new thinner design, and it may sport a larger 4″ display. We don‘t expect to see 4G LTE connectivity, which would provide 10 times faster downloads.

The iPhone 5 will arrive on Verizon and AT&T, both of which have sold the iPhone 4. We also expect to see an iPhone 5 available on Sprint. T-Mobile was in the running at one point, but recent actions suggest the company will not get the iPhone 5 this year.

We expect that the iPhone 5 will be available on October 13th or October 14th at Apple Stores, AT&T, Verizon and Sprint retailers and online. The iPhone 5 is expected to cost $199 for a 16GB model and $299 for the 32GB model.

Apple is expected to make the formal announcement on October 4th, and unlike the competition, we expect that you will be able to purchase the new iPhone within a week or two.

(Read: iOS 5 Release Date and What to Expect from iOS 5)

The iPhone 5 will run iOS 5, new software that revamps notifications and adds many new features to iPhones old and new. The iPhone 5 is rumored to have an exclusive Assistant App, which can listen to plain English voice commands and turn them into actions on your phone.

This survey is open to U.S. residents 18 and over, void where prohibited by law. Each person may only enter once. A winner will be chosen at random using Random.org’s random number generator.

The contest is open until September 30th at 11:59 PM Pacific Standard Time. Winner will be contacted by email and must respond within 3 business days to claim prize. The prize will be awarded in the form of an Apple gift card in an amount sufficient to cover the cost of a new iPhone for new customers or those eligible for an upgrade,  plus taxes and fees. The final award amount will be determined after Apple announces the iPhone 5 (or similar product) on October 4, 2011. The maximum value of the award is $399.

The gift card will cover only the cost of the subsidized cost of the iPhone 5 and will not cover wireless subscription fees. The winner will be responsible for redeeming the gift card at an Apple retail store or Apple.com. If Apple does not announce an iPhone 5, a gift card for $399 will be issued, which can be redeemed for the prize .

We will not share individual’s names, email addresses or answers provided in the survey. We will only publish data in an aggregated form.