In just a day there is an iPhone 5 jailbreak for iOS 6.

iPhone hacker Chpwn posted photos of Cydia running on a jailbroke iPhone 5, confirming that there is a possibility for an iPhone 5 jailbreak for the general public, as spotted by iPhone5untetheredjailbreak.

Chpwn confirmed the iPhone 5 running iOS 6 was jailbroken to ion1c, another iPhone hacker. 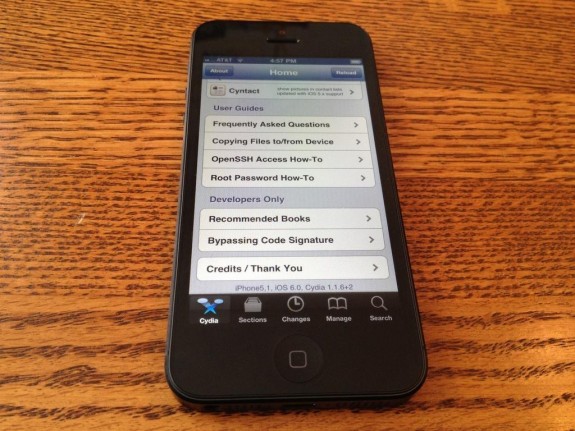 This is great news for the jailbreak community, considering the challenge of a new version of iOS and a new processor.

It is not clear if this same method will help with an iPhone 4S iOS 6 jailbreak.

The iPhone jailbreak community has already released an iOS 6 jailbreak for the iPhone 4 and iPhone 3GS, though it is a tethered jailbreak.

Some people wanted the bottom row of text from Cydia, or a photo of the device itself: twitter.com/chpwn/status/2…

Here’s the Cydia homepage on the iPhone 5: twitter.com/chpwn/status/2…

There are many reasons to jailbreak the iPhone 5, but the ability to run software not found in the official Apple App Store is one of the biggest. These iPhone jailbreak apps let users take greater control over the iPhone an customize the appearance of the software in many ways.

For some of the reasons users jailbreak the iPhone, check out our articles on the Top hidden Cydia gems and Top 5 Cydia apps for the iPhone and iPod Touch.

Jailbreaking the iPhone is not for everyone, so we recommend reading reasons not to jailbreak before attempting a jailbreak on the iPhone

You’ll also want to read up on some reasons why you might not want to jailbreak.

Stay tuned for the latest iPhone 5 jailbreak news and coverage.